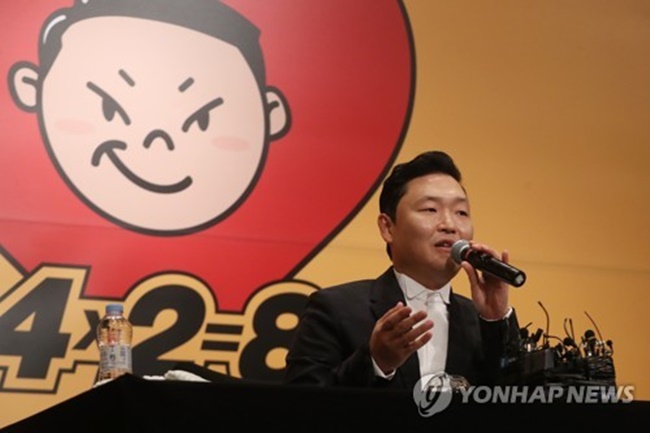 Singer-rapper Psy speaks during a news conference in Seoul on May 10, 2017, to promote his eighth full-length album “4X2=8.” (Image: Yonhap)

SEOUL, May 10 (Korea Bizwire) – Psy, the 2012 global pop sensation who released “Gangnam Style,” said on Wednesday he is really keyed up hours before the release of his eighth studio album.

“Among many things I do on Earth, standing on stage is the most not nervous, but I’m really nervous at this place now because today is when my eighth album is released,” he said during a news conference at a Seoul hotel to promote the album.

“4X2=8″ will be his latest since his seventh studio album “Chiljip Psy-da” was released in December 2015. The singer-rapper is to unveil the album at 6 p.m.

The new album has 10 tracks, including the double main tracks “New Face” and “I Luv It.”

The K-pop star again worked with Yoo Geon-hyung, who produced “Gangnam Style” and the follow-up global hit “Gentleman,” for “New Face.” “I Luv It” was written together by Psy and idol band Block B’s Zico. Psy wrote the lyrics of three songs, including “Bomb” and “Autoreverse” with iKON’s B.I., marking his first-ever collaboration with an artist to write the lyrics of a song.

“I recently listened to my own produced songs and realized that their lyrics, rap and melody sound old… I was desperately in need of young blood,” he said of the motive for collaborating with various artists for the new album.

After the new collaboration attempt, Psy felt like he could breathe. So what originally was intended to be a shorter album became a full-length one, he said. 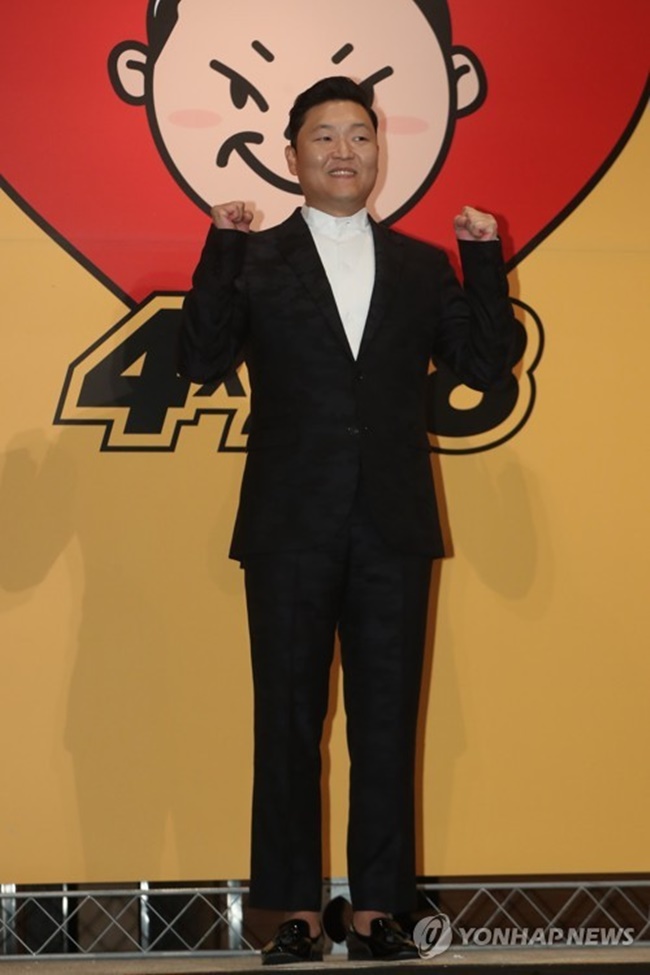 Singer-rapper Psy speaks during a news conference in Seoul on May 10, 2017, to promote his eighth full-length album “4X2=8.” (Image: Yonhap)

The album features many K-pop and television stars managed by YG Entertainment, the same star agency where he belongs. They were BIGBANG’s G-Dragon and Taeyang, Tablo of the hip-hop trio Epik High, iKON’s B.I and Bobby and actress Lee Seong-gyeong.

Psy unveiled the music videos for the album’s double lead tracks “I Luv It” and “New Face” during the news conference.

Written and composed jointly by Psy and Zico, “I Luv It” has humorous lyrics about things that Psy likes. Veteran actor Lee Byung-hun appears in the song’s music video.

His film “Inside Men” was making a sensation in theaters when the music video was filmed in October, the singer said.

The actor brought the image of his character in the film, the attractive, vengeful political henchman Ahn Sang-gu to the video, upon request from Psy.

About “New Face,” he said it was the result of his efforts to upgrade his music.

“I prepared (this double title song) to show two different colors because many fans have asked why I always dance and try to make people laugh in music videos… I think making an upgrade rather than a simple change is the mission that the public assigned to me.”