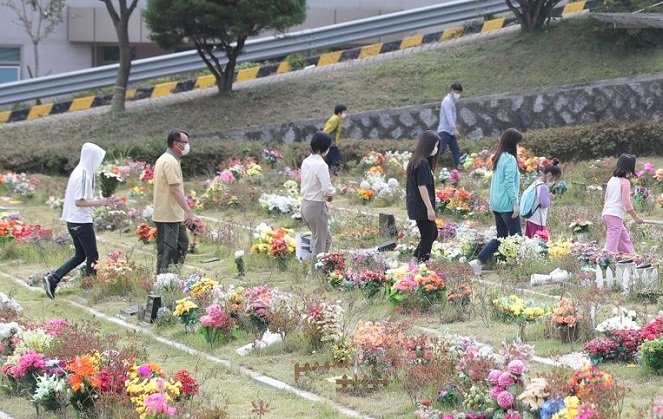 This file photo shows people visiting their ancestors’ graves at a memorial park in Gwangju, southwestern South Korea, during the Chuseok holiday in 2020. (Yonhap)

A number of metropolitan and provincial governments have announced their decisions to shut down public cemeteries and charnel facilities during the extended Lunar New Year’s holiday, which falls on Feb. 11-13, fearing simultaneous gatherings of people at those facilities would further heighten the chances of COVID-19 transmissions.

During the Chuseok fall harvest holiday in early October last year, many public cemeteries and charnel houses were closed for the same quarantine reasons.

Traditionally, Koreans head back to their hometowns to be with their families and visit their ancestors’ graves to commemorate them during the Lunar New Year’s and Chuseok holidays.

In Busan, the southern port city, almost all public cemeteries, including Busan Memorial Park and Yeongrak Memorial Park, and charnel facilities will be closed during the Lunar New Year’s holiday.

Instead, the city will enforce an advance reservation system for those who want to visit the public cemeteries for six days on weekends from Jan. 30 to Feb. 21, excluding Lunar New Year’s holidays and weekdays.

The number of visitors to the Busan and Yeongrak memorial parks will be limited to 2,880 and 1,300, respectively, during the period. 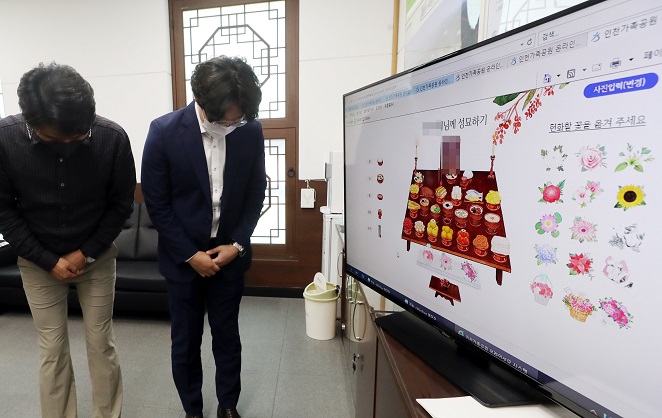 The metropolitan government of Incheon, west of Seoul, will also suspend the operations of Incheon Memorial Park, except for its crematorium, during the Lunar New Year’s holiday and ask people to pay respects to their ancestors online instead.

The Incheon government noted that as many as 5,068 people used its online ancestor worship service during last year’s Chuseok holiday.

In Gyeonggi Province surrounding Seoul, almost all public cemeteries and charnel facilities will be closed or operate through reservations during the upcoming holiday.

The provincial government said it will soon send its final recommendations to individual cemeteries and charnel houses on the basis of quarantine guidelines from the central government.

Other provincial and metropolitan governments are also planning to finalize their stances on public cemetery visits during the Lunar New Year’s holiday, though they have been advising people to avoid visiting those facilities during the holiday and use online ancestor worship services.