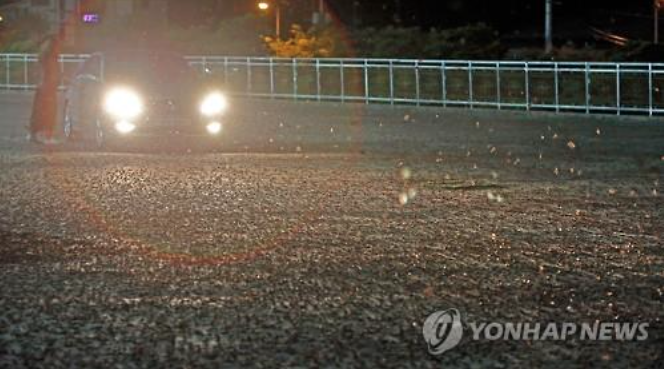 The city of Chuncheon is currently suffering from a moth attack. (image: Yonhap)

Likewise, Korea is also suffering from swarms of insects that are attacking urban and rural areas across the country.

The early-arrival of warmer weather is shortening insect life cycles, and the unusual appearance of massive swarms is hindering the lives of citizens, damaging crops, and even affecting sports games.

The city of Chuncheon is currently suffering from a moth attack.

Catocala streckeri are moths that are usually found in mountain areas and grow up to three centimeters in length, and they have arrived in hordes across Chuncheon, which has been battling these unwanted guests for the past week.

The nocturnal creatures hide during the day and gather around lights such as streetlamps once the sun goes down. Bright stadium lights are some of their favorite spots, and the city even had to cancel one of the local baseball games in response to massive swarms that gathered around the stadium, making the lights almost useless.

These months have no known natural predators, and the city’s use of pesticides is limited to early morning hours to minimize public inconvenience. The city is powerless and it has few options but to wait for nature to take its course.

“Usually their breeding period lasts 10 to 15 days, so we expect the majority to naturally disappear soon,” said an official from Gangwon Province’s Forest Development Institute. 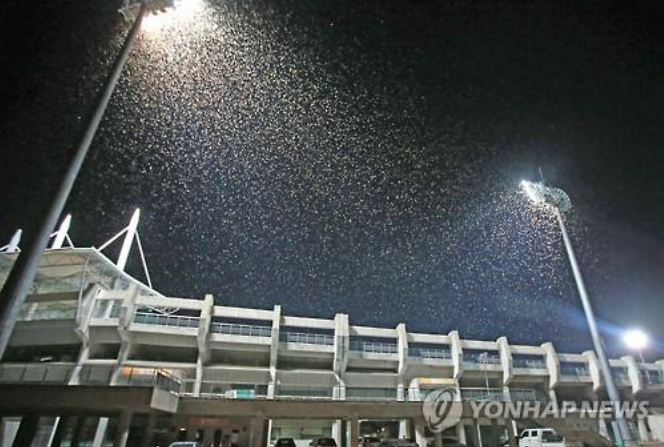 Bright stadium lights are some of their favorite spots, and the city even had to cancel one of the local baseball games in response to massive swarms that gathered around the stadium, making the lights almost useless. (image: Yonhap)

Orchards in Chungbuk’s Yeongdong County are also suffering from an unusual number of paratlanticus ussuriensis, better known as brown grasshoppers, that are damaging crops at farms and orchards across the county.

“Sometimes I see a dozen grasshoppers feeding off of a single peach tree,” says one of the owners of county’s peach plantations. “Some even bite through the plastic bags we place around the fruits for protection.”

Yecheon County has been affected by locust swarms that are damaging rice plants. These locusts usually hatch towards the end of June, but this year’s abnormal high temperatures have granted them an earlier visit, and in larger numbers.

Gyeonggi Province also noticed an increasing number of leafhoppers such as limois emelianovi, metcalfa pruinosa, and ricania sp, all of which are gradually expanding their habitat each year. Leafhoppers often suck the nutrients from crops and produce large amounts of excrement, affecting both the crops’ growth and quality.

Limois emelianvoi, which were first discovered in Anseong in 2006, have expanded their turf to Yeoncheon, Paju, and Gapyeong, and their survival rate is particularly high at 81.2 percent.

Highland farmers in the Daegwallyeong and Jeongseon regions have been troubled by aphids, better known as plant lice. These lice, which usually arrive between May and June, appeared sooner this year, in late-April. 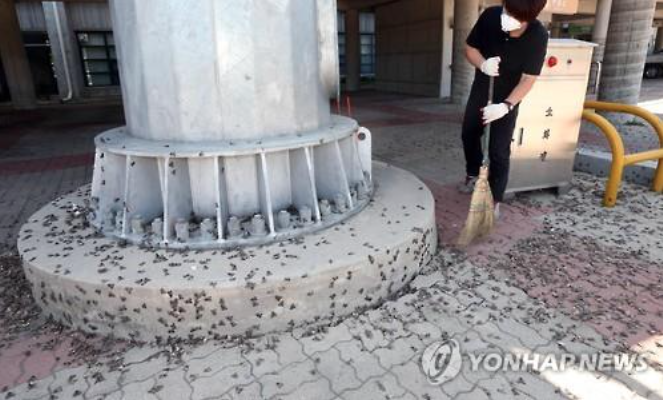 Insect experts agree that such large-scale and early appearances result from unusually high temperatures, and this year’s more frequent showers.

In fact, Chuncheon’s total rainfall in May was 109.1mm, which was three times the amount last year (34.7mm), creating the perfect environment for moth growth and development.

Similarly, Gyeonggi’s average temperature from March to May was 12.8 degrees Celsius with 78mm of rainfall, which was 1.8 degrees and 14.2mm higher than 2015, triggering the early hatching of leafhoppers.

“We need to pay closer attention to the changes brought by unusual climate trends in recent years, including global warming,” says doctor Park Gyu-taek of Korean Academy of Science and Technology. “There’s a need to discuss whether there is a possibility of future disasters from large-scale outbreaks of insects.”