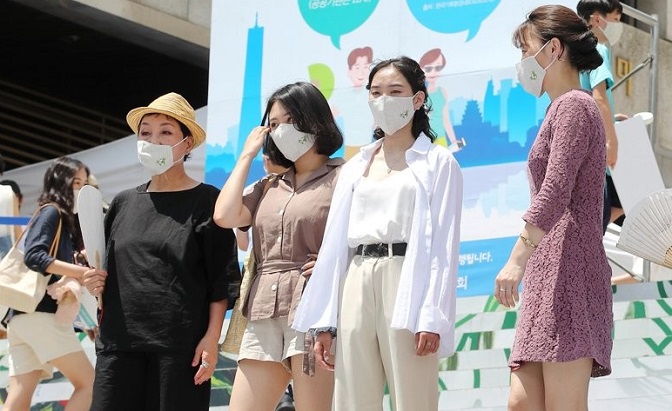 A fashion show intended to fight climate change is under way in downtown Seoul in this file photo taken on July 3, 2020. (Yonhap)

The emission standard refers to a three-year average between 2007 and 2009, adjusted annually according to facility expansion and closures. Between 2018 and 2019, the emission reduction rate totaled 19.6 percent.

The ministry said about 900,000 tons of greenhouse gases were reduced by improving behaviors such as turning off lights and complying with recommended cooling and heating temperatures, while 110,000 tons were cut through facility improvements, such as purchases of eco-friendly vehicles and supply of high-efficiency equipment.

According to the roadmap, the public sector aims to reduce its greenhouse gas emissions by 21.5 percent by 2030 from the 2017 emissions.

South Korea’s government has also finalized a goal of reducing overall greenhouse gas emissions by 32 percent from 2017 levels by 2030.

Under the goal, coal thermal power generation will be drastically scaled down, while the use of renewable energy will be sharply increased.