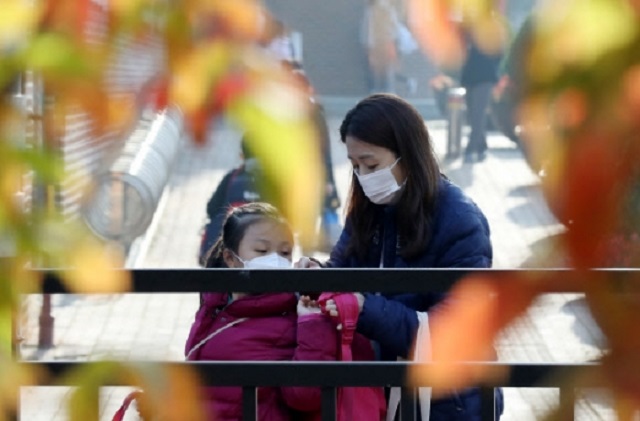 A mother helps her daughter wear her backpack in front of an elementary school in Goyang, Gyeonggi Province, on Oct. 19, 2020. (Yonhap)

SEOUL, Oct. 19 (Korea Bizwire) — The Ministry of Education’s expansion of in-person classes at schools went into effect Monday amid a growing concern over a widening learning gap and a recent drop in new coronavirus cases.

The ministry raised the attendance cap, previously at one-third for elementary and middle schools, and two-thirds at high schools, to two-thirds for all schools on Oct. 11, in line with the government’s decision to relax social distancing guidelines nationwide.

The ministry said schools in the greater Seoul area, where half of the country’s 51 million people live, are required to strictly follow the new mandate, while those in the rest of the country will have more leeway to adjust attendance caps depending on the seriousness of the pandemic.

Thus, 153 out of 154 elementary schools, 85 out of 92 middle schools and 61 out of 68 high schools are offering in-person teaching to all students every day, with different schedules.

First graders of elementary schools, including those in Seoul and its adjacent cities, are expected to attend in-person classes almost every day to help them get accustomed to school life, which has been largely absent since the start of the pandemic in the spring. 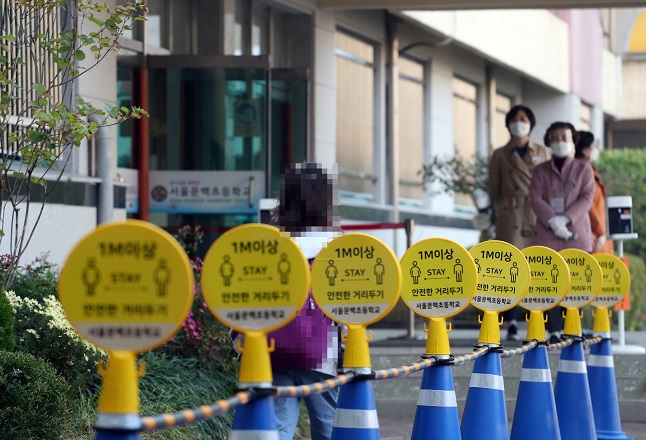 A child walks to her classroom at Seoul Munbaek Elementary School on Oct. 19, 2020. (Yonhap)

Loosening antivirus restrictions for schools also reflects a growing concern among educators and parents that a learning gap has been widening due to differences both in each child’s self-directed learning capabilities and home learning environments.

Working parents have been complaining that it is challenging to juggle between working and supervising children during online classes.

To reduce classroom crowding and serve more students at the same time, schools are expected to implement various measures, including staggered classes and split sessions between the morning and afternoon.

At Seoul Munbaek Elementary School, teachers and volunteers were seen busy in the morning helping students with temperature checks and hand sanitization before class began.

All students, except for fourth and sixth graders, came to school on Monday for in-person learning. First and second graders will physically attend classes four days a week, while the rest will come to school three days a week.

A third grader of the school, surnamed Cha, said, “I am glad to see my friends more often,” before running toward his classroom.

“Now I can come to school twice as much. I like coming to school. It’s been hard to focus during online classes at home,” said Jeon Min-ji, a first grader of Yeonseo Middle School in Seoul. 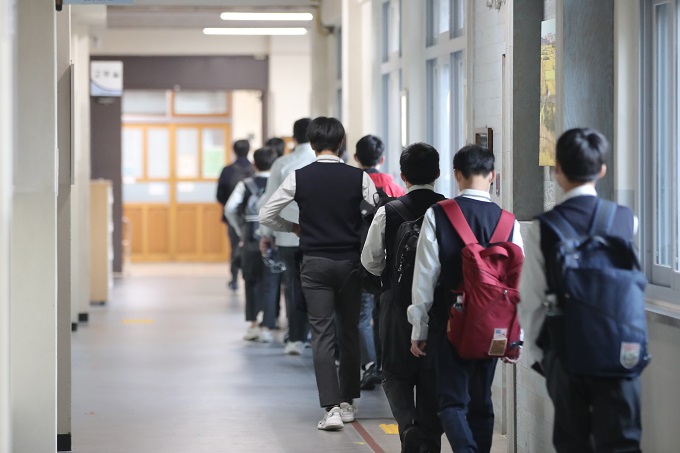 Students enter classrooms at a middle school in Gwangju, 330 kilometers south of Seoul, on Oct. 19, 2020. (Yonhap)

Outside the school entrance of Munbaek Elementary School, anxious-looking parents of first graders were watching their kids enter school.

“I know I have to follow the policy of expanding in-person instruction, but I am worried about possible infection with the coronavirus,” a parent said.

“It is hard to watch my kid get stressed out while being almost locked up at home,” but taking in-person classes more often is also very “worrisome,” the parent said.

Another parent from Namyangju, Gyeonggi Province, also said, “My child and I are both excited to be able to resume normal school life, but I am also worried about whether we can have the cake and eat it too,” referring to in-person learning and school safety.

Some parents called for an all-out expansion of in-person learning regardless of the school year, citing worsening learning gaps and deficiencies coming from remote schooling.

A parent argued that children of working parents, in particular, are “being left neglected at home during the day.”

“A learning gap is not just an issue of lower graders, so I don’t understand why younger students get to come to school more often.”