“Although some business owners of the nation’s big companies have been convicted and sentenced, they can be given another chance if they are willing to contribute to the national economy as a whole by creating jobs, returning profits to society, committing themselves to reinvigorating the stalled economy and lastly, if the public opinion would be in favor of pardoning them in this regard.”

“Enforcing laws in an excessively strict manner toward corporate tycoons who violated laws is of no help to invigorating our sluggish economy at all. I couldn’t agree more with the justice minister’s recent remarks [of possibly pardoning them].” 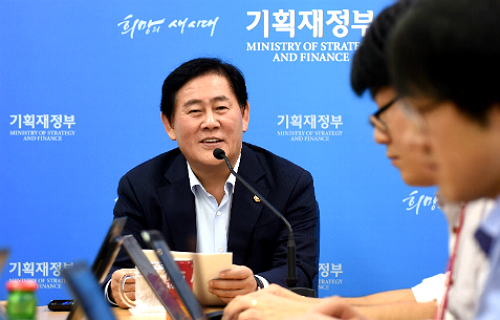 SEOUL, Sep. 28 (Korea Bizwire) – Of late, highly suggestive remarks from the nation’s top-ranking government officials, regarding a possible pardoning of several high-profile business owners, who were sentenced and jailed for some charges, have stirred controversy whether this is right time to give a second chance even if those measures are conducive to reviving the economy as a whole.

If the government carries on their plan and pardons some business owners for that matter, former chairman of SK Group, Chey Tae-won is highly likely to benefit from the lenient gestures, according to local sources and reports.

And SK Group, on their part, with the absence of the active chairmanship, is reportedly facing the worst for its business, making a case that the lack of the leadership is increasingly exerting negative impact on one of the top three conglomerates and — the South Korean economy as a whole.

In fact, SK Innovation has marked the operating loss of 50.3 billion won (about US$48 million), the worst record ever, in the second quarter of this year, and there might be little silver lining in the third quarter, according to local reports. It has been a while since SK Telecom, a cash cow of SK Group, went downhill due to excessive competition in the mobile and ICT market. Only SK Hynix that chairman Chey Tae-won pushed taking over, albeit in fierce opposition, made the operating profit of 1 trillion won (about US$957 million) in the second quarter.

What is the worst to the group is the absence of its vision; also, the vacancy of the chairman makes it difficult to promote creative business strategies and make large-scale investments.

In contrast to the stance of the ruling party, Park Young-sun, floor leader for the opposition New Politics Alliance for Democracy, retorted, “There is a movement in which top policy makers even including the justice minister are lobbying to pardon jailed corporate tycoons. It seems that they cannot avoid condemnation if they carry out their plans as our society becomes more stratified between the powerful and the majority of those without.”