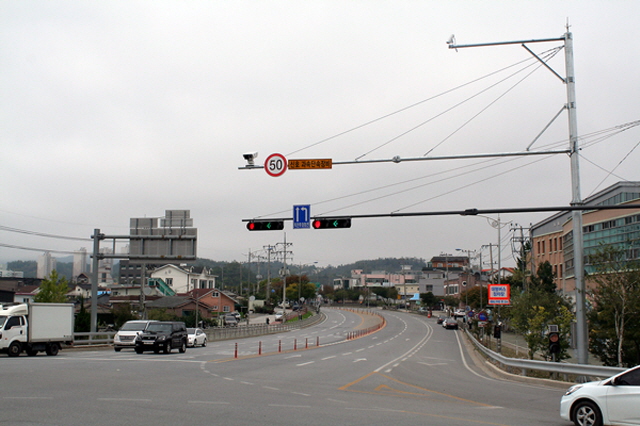 The radar-based cameras can detect vehicles speeding not only on the regular throughway but also on the shoulder. (image: Yeongwol Police Station)

CHUNCHEON, Aug. 1 (Korea Bizwire) — Smart unmanned speed control equipment, which can monitor several lanes at once with a single camera, will be operated in Gangwon Province.

The Gangwon Provincial Police Agency (GPPA) reported that it will operate radar-based unmanned speed control cameras, which are different from the existing lane-based cameras, starting in August.

The equipment, first introduced by the GPPA among police offices nationwide in 2018, can monitor multiple lanes with a single camera. Thirty-four units have been installed in the province so far.

Of the installed cameras, from May to July, 26.3 infractions were reported per piece of equipment, based on an analysis of 29 cameras that figured in a three-month pilot project.

The number of infractions was 6.4 times higher than the previous lane-based cameras, which only reported 4.1 cases per camera.

The conventional method of control equipment, which only detects speeding for vehicles passing directly under the camera, allows drivers to steer in different lanes to avoid the cameras.

However, police say that the number of detected infractions has increased as with the new smart cameras.

The radar-based cameras can detect vehicles speeding not only on the regular throughway but also on the shoulder.

To that end, wherever smart-type surveillance equipment is installed, no matter how much drivers attempt to maneuver to avoid the camera, they will be caught speeding.

The site of the most infractions during the trial period was an intersection in Samcheok, where an average of 225.2 vehicles were caught speeding on a daily basis.

A section of Gyeongchun-ro and in front of an apartment building in Gangneung followed the list with an average of 156.6 cases and 48.1 cases per day, respectively.

“We will continue to expand and install unmanned traffic control equipment to prevent large traffic accidents caused by speeding,” a police official said.