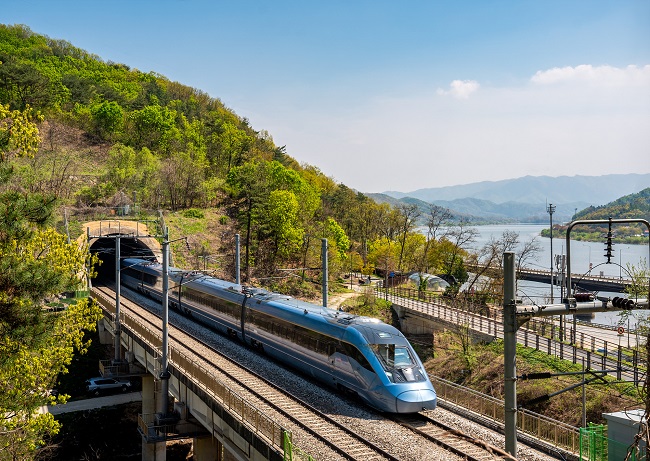 This file photo provided by the transport ministry shows the country’s sole KTX-Eum bullet train on the Seoul-Gangneung route.

SEOUL, May 6 (Korea Bizwire) — The Korea Railroad Research Institute said it has developed an unmanned automated system that monitors the safety of railroad facilities like bridges, using drones and artificial intelligence (AI) technology.

The system consists of drones, a mobile control center that operates the drones and software that automatically analyzes and detects potential facility defects and damages found in the video footage taken by the drones.

The drones are hexacopters equipped with six propellers, and are capable of withstanding strong winds generated along the railway. They are also immune to electromagnetic waves caused by trains.

The mobile control centers communicate with the drones, transmitting safety check scenarios to them, and analyzing the video footage to detect facility defects and damages.

The damage detection software uses an AI-based algorithm for the accurate detection of possible damages and defects.

It organizes videos by the types of facilities and renders the location of the defects in both 2-D and 3-D.

The institute expects that this new system will replace dangerous tasks previously carried out by human personnel, preventing accidents, lowering maintenance time and costs and ensuring systematic checks on the safety of bridges through big data analysis.