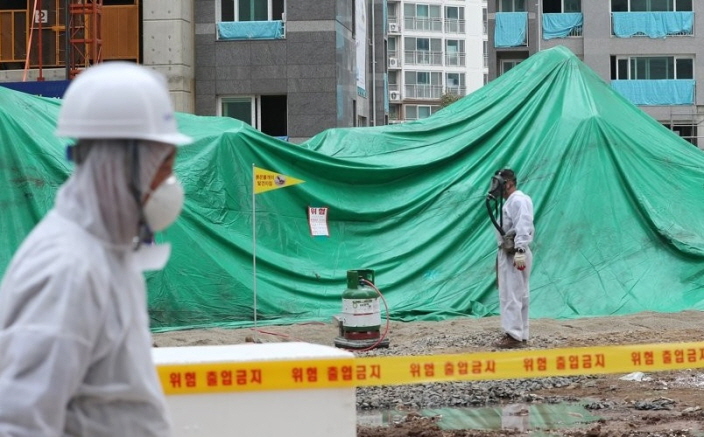 To counter the problem, authorities planted 150 plastic traps, each measuring 15 centimeters, at two spots where the ants were discovered. (image: Yonhap)

DAEGU, Sept. 19 (Korea Bizwire) — A species of red fire ants was discovered at an apartment construction site in Daegu today, by constructions workers, prompting them to halt construction work.

The day before, a total of 830 ants including a red fire ant queen, 770 worker ants and others were discovered, raising a red flag for quarantine officials.

To counter the problem, authorities planted 150 plastic traps, each measuring 15 centimeters, at two spots where the ants were discovered.

In order to lure ants to the traps, ant bait, antifreeze and alcohol was placed inside the traps. In the afternoon today, traps were installed within a radius of 2 kilometers.

One expert who participated in the quarantine efforts said that more traps will be put into places where ants are likely to be found, mostly in grassy fields and parks.

To fight ants found in Chinese landscape rocks used at the construction site, green tape was plastered in the cracks in between the rocks.

The green tape was covered with even more tape to form a double layer ahead of fumigation efforts. The fumigation will be taking place today for six hours from 1 p.m.

After the appearance of red ants, residents of the area reacted nervously. One elderly woman who was passing by the construction site said that she kept looking at the ground to check for ants.

Just across from the construction site is a wholesale vegetable market.

Despite the news that red ants had been discovered in the area, most of the merchants continued on with their daily commercial activities.

One merchant said that he had heard about the appearance of ants through news reports but did not hear anything about the fumigation efforts.

One worker said that despite the cooperation the construction crew had shown regarding the proliferation of ants, workers were upset that work had to be discontinued.