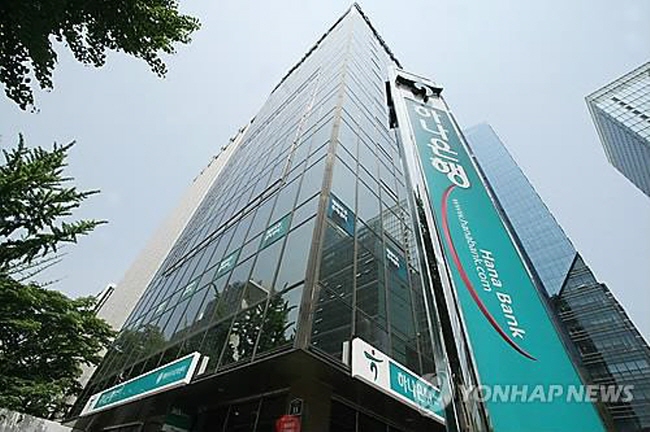 Hana Financial said it will take the next step on Aug. 10 after deciding the name of the integrated bank and composing the management at a shareholders meeting. (image: Yonhap)

Hana Financial had been pushing for the merger between Hana Bank and Korea Exchange Bank (KEB) since its acquisition of KEB from U.S. buyout fund Lone Star in 2012 but faced strong opposition from the KEB union, which demanded that Hana deliver on its promise to run KEB as an independent entity for five years.

Last week, however, the KEB labor union agreed on the merger, prompting the financial group to seek approval from the Financial Services Commission (FSC).

The FSC said the approval was granted at its regular decision-making meeting.

“When we receive a request (from Hana Financial) to seek official permission for the merger, we will start the review process for it,” the FSC said in a statement. “We will look into (the merged company’s) corporate governance structure and its executives in the review.”

Hana Financial said it will take the next step on Aug. 10 after deciding the name of the integrated bank and composing the management at a shareholders meeting.

Also, Hana Bank and the KEB will discuss the issue at their own shareholders meetings slated for Thursday, when Hana Financial will disclose its second-quarter earnings.

The FSC, which has stressed that the labor-management agreement is a prerequisite for the integration, advanced the review schedule of preliminary approval, citing that it had gone through the process six months earlier.

The banking group had filed a petition for the preliminary approval in January but soon withdrew it as a Seoul court upheld the KEB union’s demand to stop the merger process.

In principle, it takes the FSC 60 days to give primary approval and another 30 days to grant its official blessing.

The banking group expects the new Hana-KEB bank to be launched as early as September.

Shares of Hana Financial fell 1.06 percent to close at 28,000 won on the Seoul bourse, with the benchmark KOSPI retreating 0.91 percent. The FSC announcement was made after the market closed.’