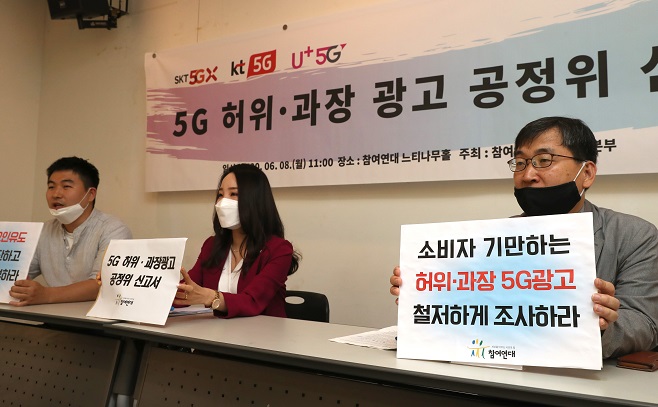 In this photo, taken on June 8, 2020, officials from People’s Solidarity for Participatory Democracy, a local civic group, hold signs at a press conference in Seoul, asking telecom operators to stop false and exaggerated advertisement of their 5G services. (Yonhap)

The Ministry of Science and ICT has recently started to evaluate 5G service quality in Seoul and major cities in the country, according to the sources.

This is the first time the state regulator has launched a quality evaluation of the country’s 5G network since it was commercialized in April last year.

“We are doing our best to provide as much information as possible through this evaluation,” a ministry official said. “We hope this can solve some of consumer discontent.”

According to the Consumers Union of Korea, a consumer advocacy group here, it handled 2,055 consumer complaints regarding 5G services over the past 12 months, with one-third of them related to the cancellation of 5G subscription due to poor quality.

Last week, People’s Solidarity for Participatory Democracy, a local civic group, filed a complaint with the Fair Trade Commission to investigate the three mobile carriers over false and exaggerated advertisement of their 5G services.

The mobile carriers claimed that people should consider overall coverage of 5G service area instead of network speed differences.

The firms also pointed out that they were forced to slow down settings of 5G infrastructure in the nation, as buildings had to shut down and limited the entry of people due to the virus outbreak.

As of end-April, there were 6.33 million 5G subscribers in South Korea, according to the ICT ministry.