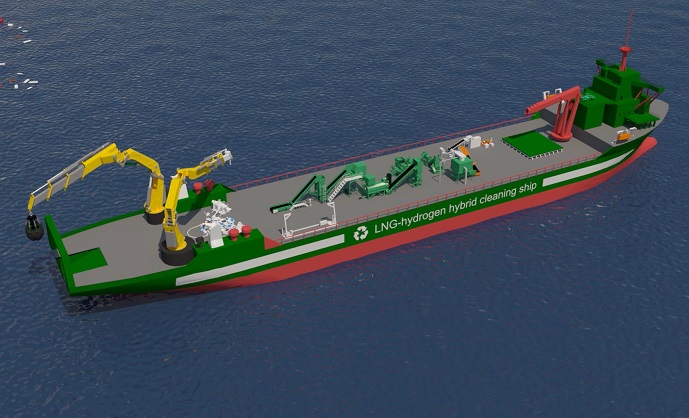 The Hydrogen Ship Technology Center at Pusan National University in Busan said Tuesday that it will carry out a project to develop the eco-friendly ship for collecting and treating floating waste at sea.

The ship will be designed as a hybrid vessel that uses both liquefied natural gas (LNG) and hydrogen as its fuel to comply with the International Maritime Organization’s increasingly strict marine environment regulations.

The process to break and store the marine waste floating in the Pacific Ocean will be carried out on the ship itself.

As the primary R&D tasks for this project, the university will develop technology to freeze and break marine waste using cryogenic temperatures generated in the LNG heat exchange process, as well as a propulsion system that uses hydrogen generated in the LNG reforming process.

The marine waste floating at sea will be processed into powder via eight stages of treatment in the vessel.

The vessel will have a 4,000-square-meter cargo tank to stores marine waste in a powder form, as well as a proton-exchange membrane fuel cell (PEMFC) that is a hydrogen generator.