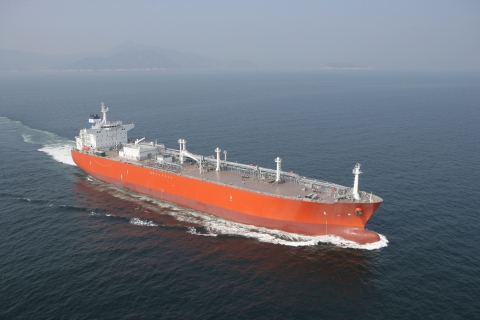 Korean shipbuilders are overtaking Chinese rivals by a large margin, cementing their No. 1 position in the world. (image: DSME/ Newswire)

SEOUL, Korea, Mar 7 (Korea Bizwire) – Samsung Heavy Industries won on February 14 a deal to build a floating liquid natural gas (FLNG) ship for Malaysia’s state-run oil company Petronas at the cost of US$1.47 billion. Given most container ships cost about $200 million apiece, this is more than seven times more expensive. Including the FLNG vessel contract and five large-scale container ships, Samsung Heavy has landed deals worth $2.05 billion this year to date.

As for Daewoo Shipbuilding & Marine Engineering, it succeeded in winning eight 84,000-cubic-meter very-large gas carriers from an Asian shipowner at the end of last month. Including four additional ships of the identical design, DSME expects that it will build a total of 12 gas carriers. The company has so far won a total of $1.44 billion won in orders for the past two months.

In terms of value of orders booked, Hyundai Heavy Industries is by-far the No. 1 shipbuilding company. With as many as 50 ships in its order book, the company has so far logged in $4.60 billion in order volume, more than double that for the same period last year when the corresponding figure was $2.20 billion.

It seems like the resurrection of the shipbuilding industry. Since the 2008 global financial crisis, Korea’s shipbuilders have been under one of the most serious downturns they have ever endured. Maybe they are finally seeing the light at the end of the tunnel. Korean shipbuilders are overtaking Chinese rivals by a large margin, cementing their No. 1 position in the world.

According to Clarkson Research Services on March 5, the total order booking volume by Korean shipbuilders for the two months in January and February was 3,131,387 tons (CGT), up 61 percent from 1,940,642 tons during the same period last year. Accordingly their world market share jumped to 42.3 percent from 27.6 percent, outcompeting Chinese shipbuilders (31.4%). In terms of value, Korean companies almost doubled their order amount to $7.02 billion from last year.

The main reason for Korean shipbuilders’ good performance lies in their focus on higher value-added ships. Koreas companies are currently sweeping high value-added orders for building drillships and very large-scale container ships while Chinese shipyards are focusing mostly on low-margin bulk carriers and oil tankers. Thanks to the shale gas boom since last year that has increased the demand for LPG (liquefied petroleum gas) carriers, Korean shipbuilders have benefited more.