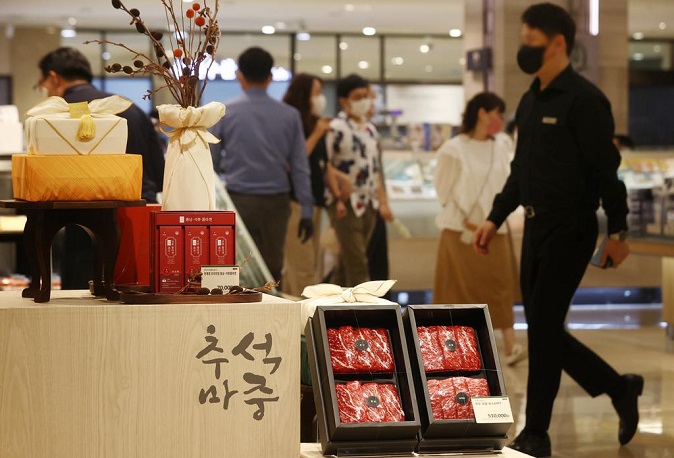 Various food and other items are displayed at a department store in Seoul on Aug. 19, 2022, ahead of Chuseok. (Yonhap)

SEOUL, Sept. 28 (Korea Bizwire) — Retail sales in South Korea marked the largest on-year growth so far this year in August on the back of the increase in people’s outdoor activities amid eased antivirus curbs and preparations for the Chuseok holiday, data showed Wednesday.

The combined sales of 25 major offline and online retailers came to 14.61 trillion won (US$10.21 billion) last month, up 15.4 percent from 12.7 trillion won a year earlier, according to the data compiled by the Ministry of Trade, Industry and Energy.

It marked the sixth consecutive month of on-year growth.

Sales from offline stores rose 14.5 percent in August on the solid demand for luxury goods, clothing and other fashion items, and sporting goods.

Of the offline stores, department stores saw their sales surge 24.8 percent on-year, which was led by rising demand for foodstuff and clothing ahead of the Chuseok holiday, according to the ministry.

Chuseok, or the Korean fall harvest celebration, fell on Sept. 10 this year.

Sales of convenience stores also went up 12.8 percent in August on the back of the popularity of food packages and other daily items.

Sales from online platforms jumped 16.4 percent from a year earlier last month over the spread of the contactless shopping trend amid the prolonged pandemic.

Sales of foodstuff advanced 27.8 percent, and those of cosmetics via online platforms rose 23.1 percent on-year as people resumed outdoor activities.

Demand for various tourism and cultural services also went up 21.9 percent during the summer vacation season and amid eased rules against the COVID-19 pandemic, according to the ministry.

Online platforms accounted for 47.6 percent of the total sales in August, slightly up from 47.2 percent a year ago, according to the ministry.

South Korea has seen another virus wave since late July following a monthslong let-up after the worst infections that peaked in mid-March, but it has slowed down gradually.

Despite the upsurge, the government decided not to reimpose strict antivirus regulations to support people’s return to normalcy. All schools resumed in-person classes, and many companies ended their remote working policies.