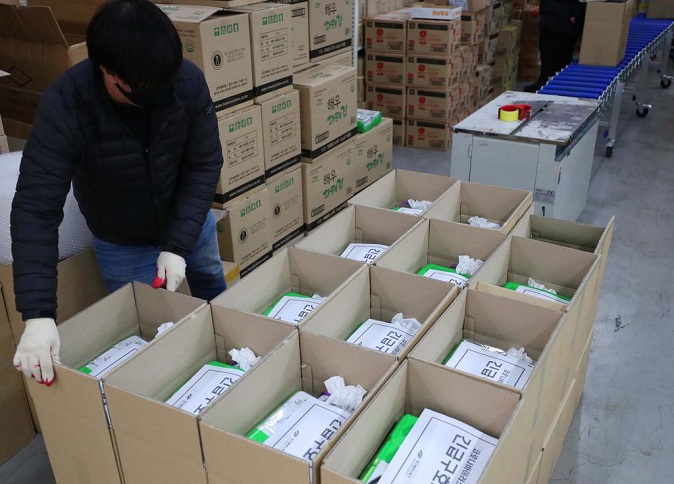 A worker prepares relief packages to be delivered to COVID-19 at-home patients in the southeastern city of Daegu, in the Jan. 25, 2022, file photo. (Yonhap)

SEOUL, April 28 (Korea Bizwire) — Retail sales in South Korea rose 7.1 percent in March from a year earlier on the back of growing demand for foodstuff, daily items and luxury goods amid the worst wave of the COVID-19 pandemic, the industry ministry said Thursday.

The combined sales of 25 major offline and online retailers reached 13.69 trillion won (US$10.81 billion) last month, up from 12.8 trillion won a year earlier, according to the data compiled by the Ministry of Trade, Industry and Energy.

People appear to have purchased more luxury goods instead of spending vacations overseas amid the omicron-driven worst wave of the pandemic across the country, ministry officials said.

Among offline retailers, department stores saw their sales advance 7.8 percent on rising demand for luxury goods and their various promotions in spring.

Smaller supermarkets saw their sales rise 4.6 percent on-year on higher demand for foodstuff, while the sales of discount chain stores, such as E-mart and Lotte Mart, remained unchanged, according to the ministry.

Sales from online platforms also jumped 7.9 percent in March from a year earlier.

On online platforms, sales of foodstuff and everyday living items surge 24.6 percent and 8.4 percent, respectively, on-year in March, in line with the jump in the number of at-home treatment COVID-19 patients and quarantined people, according to the ministry.

South Korea experienced a drastic surge in COVID-19 infections that began around January, with the daily caseload spiking to over 620,000 in mid-March from the 10,000 level at the end of January.

Online platforms accounted for 49.45 percent of the total sales last month, up from 41.19 percent a year earlier, the data showed.