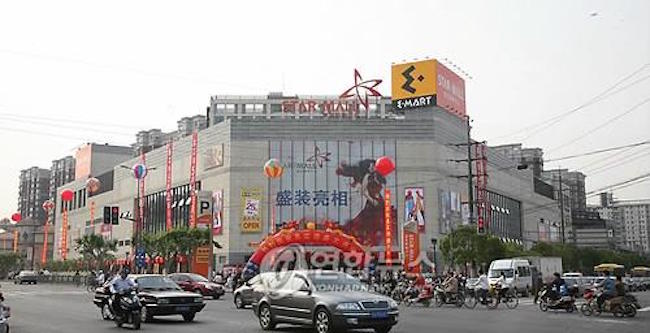 Sources in the retail investment banking sector said E-Mart inked an agreement with Thailand’s CP Group to hand over the stores in Shanghai pending approval from Chinese regulators.

They said that the company is in the process of selling off its one outlet in Xishan by the end of the year.

Exact details of the sale have not been released, but market watchers said that E-Mart will not be able to get the full market value for the stores and will have to settle for much less.

The net book value of the stores to be sold to the Thai food and agribusiness stands at around 68 billion won (US$59.9 million), with CP Group expected to benefit from economy of scale with the takeover. The company already operates a supermarket chain.

“Getting approval from Chinese authorities takes time, and the company cannot reveal details about the contract before then, but internally the goal is to exit China by the end of 2017,” said an E-Mart insider, who declined to be identified.

E-Mart first entered the Chinese market in 1997, with the total store number rising to 30 at one point yet it had to scale back operations in the face of tough conditions and weak sales.

The company, meanwhile, said that it is moving into new Asian markets to compensate for China, where the diplomatic row over Seoul’s decision to deploy a U.S. anti-missile defense system on its soil has hurt sales of South Korean-made products and services.

E-Mart said that it is making a determined push to expand into the Mongolian, Vietnamese, Laotian and Cambodian markets that offer good growth potential.

It said a second store in Mongolia will be opened Friday following the first that started operations in July 2016.