SEOUL, Oct. 11 (Korea Bizwire) — K-pop girl group Mamamoo expressed hope Tuesday it would make a sensation on music charts, returning as a whole group after one year with a new EP under an ambitious name.

The EP’s title “Mic On” means Mamamoo has turned on its mic and is ready to make splashes. In addition, the name of its lead track is “Illella,” which sounds like a foreign word but is actually a Korean word meaning “You might make it big.”

“As indicated by the title, Mamamoo is back to create a sensation, so please look forward to our return,” member Solar said during a media showcase for “Mic On,” released at 6 p.m.

“Many songs are firmly retaining their posts on charts these days, but we want to become a chart sensation.”

For the lead song, Mamamoo tried for a reggae sound for the first time in its eight-year-long career.

“You may be afraid to take on a new challenge, but I think you can have a great sense of accomplishment if you do it well,” Wheein said of the reason for the band’s new attempt.

“I hope many people will get excited after listening to ‘Illella.’ I’d like to hear that Mamamoo’s performance is really cool,” Moonbyul said, smiling.

“Mic On” marks the band’s first release involving all four members since the act’s compilation album “I Say Mamamoo: The Best” was put out last September to mark the seventh anniversary of its debut. 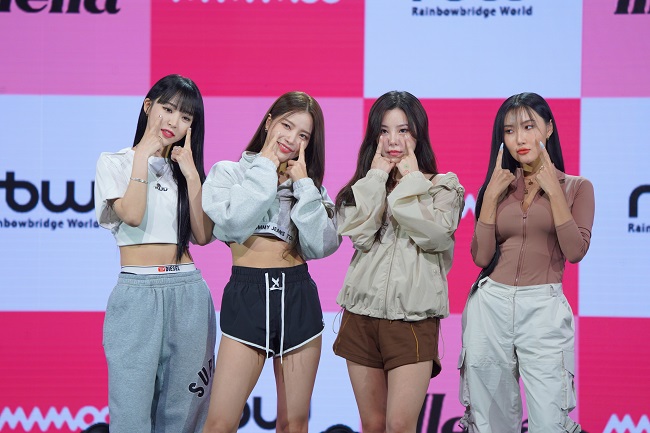 K-pop girl group Mamamoo poses for the camera during a media showcase for its 12th EP, “Mic On,” on Oct. 11, 2022. This photo was provided by the band’s agency RBW.

The group’s four members — Solar, Moonbyul, Wheein and Hwasa — have spent the past year focusing on their individual activities.

After the long-awaited comeback, the band said it will hold concerts at home and abroad until early next year.

The quartet debuted in 2014 with “Mr. Ambiguous” and instantly became popular as a group with particularly strong live vocals.

Although eight years have passed since its debut, Mamamoo showed a strong desire to take a chance on new music.

“There are too many genres of music. Since there are so many that we can do, we still have plenty of things that we want to show you,” Moonbyul said.