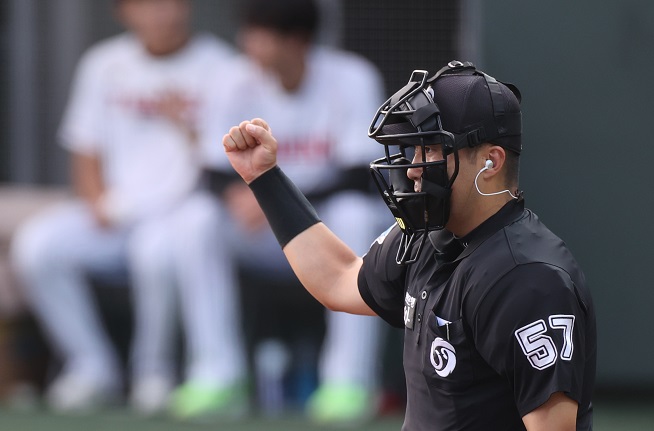 The home plate umpire calls a strike, aided by so-called robot umpires, during the Futures League game between the Hanwha Eagles and LG Twins at LG Champions Park in Icheon, southeast of Seoul, on Aug. 4, 2020. (Yonhap)

SEOUL, Aug. 4 (Korea Bizwire) — So-called robot umpires officially debuted in a Korea Baseball Organization minor league match Tuesday as the sports organization is preparing to use the system for the entire 2021 season.

The automated ball-strike system, simply known as robot umpires, was used for the first time, in a Futures League game between the Hanwha Eagles and LG Twins at LG Champions Park in Icheon, southeast of Seoul.

The debut came after the radar and camera-based ball-tracing system was installed at the baseball stadium, as well as at the Masan Baseball Stadium, and underwent tests for three minor games last week.

The robot umpires will call balls and strikes in a total of 26 minor league games this season to have their reliability and accuracy validated.

Before the start of the match, chief umpire Jeong Eun-jae was seen using an earphone that is connected to the robot umpires via a smartphone. He received the call of ball or strike from the system and then gave a matching hand signal in his pre-match practice.

Besides the ball or strike calls, the other judgments are made by human umpires the same as before.

Though the system is colloquially called the robot umpire, or robo-ump, there is no actual robot standing behind the catcher.

A camera-based ball-tracking system will identify where a pitch ends up with the information going to the home plate umpire. 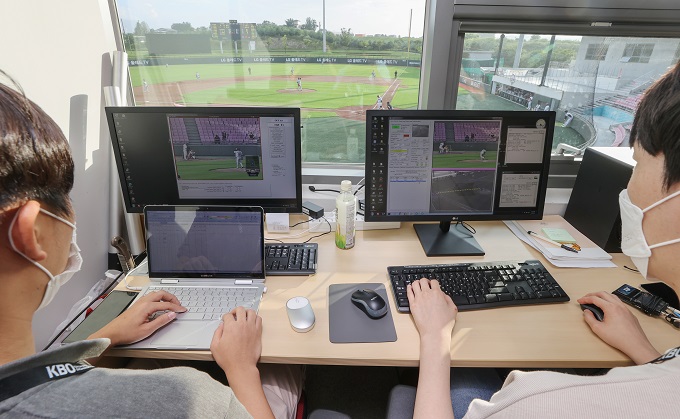 KBO officials test a robot umpire system before the Futures League game between the Hanwha Eagles and LG Twins at LG Champions Park in Icheon, southeast of Seoul, on Aug. 4, 2020. (Yonhap)

The KBO has announced plans to use the automated system in the second tier Futures League for the entire 2021 season and apply it to the KBO’s top league as early as 2022.

According to a KBO umpire who has tested the system during another game, the system went smoothly, except for some minor glitches.

“I was a little perplexed at the machine giving a strike call over what I saw as a ball,” umpire Kim Seon-soo told Yonhap News Agency. But overall, there were only minor differences over his and the machine’s decisions, he said.

The mobile application that transfers calls from the machine to the umpire’s earphone also disconnected during the test match and on some occasions there was a delay in making calls, he added.

Overall, the robot umpire system “may help enhance fairness (of judgment) if its correct decisions could provide references to go to when a decision between a ball or a strike is difficult to make,” he said, with the stipulation that his comments only represent his personal view.