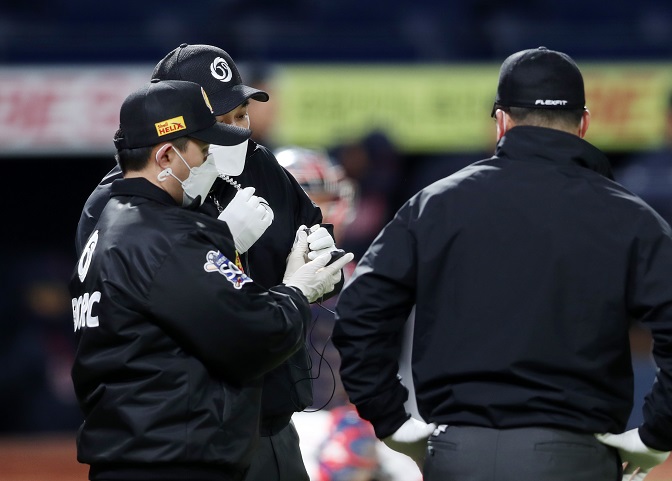 In this file photo from April 21, 2020, umpires connect with the video replay center at the Korea Baseball Organization head office in Seoul during a preseason game between the Lotte Giants and the NC Dinos at Changwon NC Park in Changwon, 400 kilometers southeast of the capital. (Yonhap)

The official with the Korea Baseball Organization (KBO) said about 20 games in the Futures League will have the automated ball-strike system in place this season, and it will be used for the entire 2021 season.

The KBO’s top league may follow suit as early as 2022.

Though the system is colloquially called the robot umpire, it doesn’t involve any robots standing behind the catcher to make calls.

A radar-based ball-tracking system will identify a pitch’s location, and the information will reach the home plate umpire via his earpiece for the call on the field.

Major League Baseball (MLB) experimented with the electronic strike zone in the eight-team independent league called the Atlantic League in 2019.

MLB had planned to expand the implementation of the automated system to other minor leagues before the coronavirus pandemic put baseball in North America on hold this spring.

KBO umpires have been on the hot seat in recent seasons for their inconsistent strike zone.

In May, after a veteran player raised issues with umpires’ performance in a televised interview, the KBO demoted an entire umpiring crew of five officials — four umpires plus an alternate — to the Futures League. The five spent 10 days in the minors.