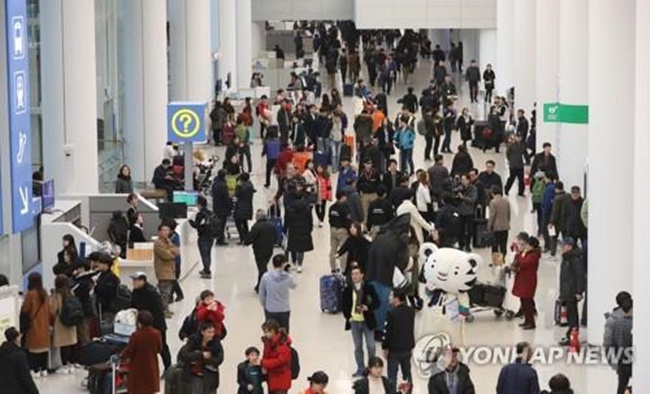 SEOUL, Feb. 26 (Korea Bizwire) – South Korea’s budget carries transported a record high of over 20 million passengers for the whole of 2017, up sharply from the year before, industry data showed Saturday.

On international routes, Jeju Air ranked No. 1, having transported a little over 5.82 million people, followed by Jin Air with 4.85 million and T’way Airlines at 3.27 million. Even newly launched Air Seoul flew over 820,900 people in 2017, a year after its launch, while Air Busan and Eastar Jet carried 3 million and 2.51 million passengers, respectively.

The average seat occupancy rate for all carriers stood at 85.4 percent, a gain of 1.8 percentage points from the previous year.

Gains by LCCs however, ate into the business of the country’s two full-service carriers.

Taken together, Korean Air Lines Co. and Asiana Airlines Inc. transported about 32.26 million people last year, down 1.9 percent from the 32.9 million tallied in 2016.

The number of passenger carried by Korean Air, the country’s largest flag carrier, edged down 0.6 percent on-year to 18.92 million, while Asiana handled 13.34 million people, down 3.8 percent from 2016.

The average seat occupancy rate for Korean Air stood at 78 percent, with the corresponding number for Asiana standing at 82 percent, both slightly down from 2016.

“The expansion of LCCs and the lower ticket prices they provide is causing more people to opt for the no-frills option when flying,” a market insider said. He added that sluggish economic growth is fueling demand for cheaper fares.

Last year, the number of South Koreans going abroad hit 26.49 million, up a sharp 18.4 percent from the previous year.