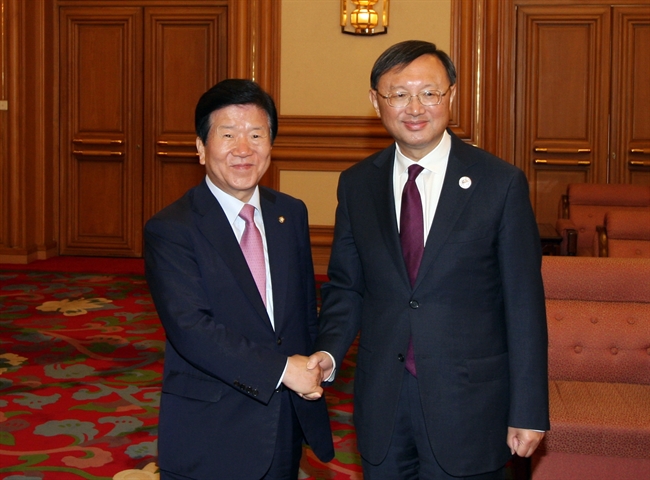 South Korea sent a delegation led by Rep. Park Byeong-seug to the two-day gathering at the invitation of China. Rep. Park(L) met with Chinese State Councilor for Foreign Affairs Yang Jiechi(R) on Monday and discussed cooperation and issues of mutual concern, including North Korea. (image: Yonhap)

SEOUL, May 17 (Korea Bizwire) — South Korea and China appear to be moving toward mending their strained ties over the installation of a U.S. missile defense system here as exchanges and contacts in diverse areas have apparently been gaining traction since the inauguration of liberal President Moon Jae-in, experts said Tuesday.

The recently wrapped-up international forum hosted by China, in particular, served as a “good starter” for the two Asian neighbors’ push to keep their ties back on track and maintain a unified approach to the ever-growing nuclear and missile threats from North Korea, they added.

China held the Belt and Road Forum for International Cooperation on Sunday and Monday focusing on its economic connectivity and cooperation with the countries in Eurasia and as far as Europe and Africa. It is part of the so-called “One Belt, One Road” project, which was suggested by President Xi Jinping in 2013.

South Korea sent a delegation led by Rep. Park Byeong-seug of the Democratic Party to the two-day gathering at the invitation of China.

China belatedly sent out an invitation to the Seoul government in time for President Moon Jae-in’s inauguration last week, and the new government accepted it in a sign that both sides are willing to improve ties which have been rocky over missile system deployment.

On the sidelines of the forum, Rep. Park met with Chinese State Councilor for Foreign Affairs Yang Jiechi on Monday and discussed cooperation and issues of mutual concern, including North Korea.

“Let us make efforts to restore South Korea-China relations upon the launch of the Moon Jae-in administration,” Yang was quoted as saying during the meeting. “It is important to respect each other over issues concerning the interests of one another.”

Yang also told the delegation that China “will always closely discuss Korean Peninsula issues with South Korea without exceptions and will continue to cooperate with South Korea for the peace and stability of the peninsula.”

His comments were interpreted as a signal for China’s willingness to repair ties with South Korea and commitment to work together with South Korea in dealing with the North and its ever-evolving nuclear and missile threats.

The Asian neighbors have experienced a chill in relations, as Beijing has strongly opposed the installation of the THAAD battery for fear it could hurt its security.

China has taken what appears to be retaliatory steps against South Korean companies including imposing restrictions on travel to Seoul. Cultural products such as K-pop, dramas and movies have also taken the brunt of the retaliation.

That has spawned worries that the worsening Seoul-Beijing ties serve as a major hindrance to global cooperation against the North’s nuclear and missile threats.

On the campaign trail, Moon said that the THAAD installation should be put on hold, adding the process should be left up to the incoming government. Experts say that Moon’s stance on the THAAD issue is raising hopes among the Chinese that the situation can be resolved in their favor.

Apparently pointing to an improved mood, Chinese President Xi Jinping called Moon on his inauguration last week in an unusual move. It was followed by the invitation of South Korea to the forum that Xi cherishes.

A thaw in the bilateral relations is also being felt in other areas including culture and business. A K-pop music chart reappeared on a major Chinese online music site, with restrictions on Korean-made musicals and Korean bands showing signs of a letup.

Experts admit that the improving mood is not enough to resolve the core issue related to the THAAD but at least the recently expanded contacts are boding well for their bilateral ties.

“There are signals here and there pointing to the improving mood in the bilateral ties between the two countries timed for the change of government in South Korea and the meeting between officials of the two countries in Beijing,” said Kim Heung-kyu, political science professor at Ajou University.

“It seems to be apparent that China is seeking to find an exit (from the THAAD stalemate), showing the intention to put an end to the controversy,” he added. “As China is employing an exit strategy, South Korea should capitalize on this opportunity well and try to produce a breakthrough.”