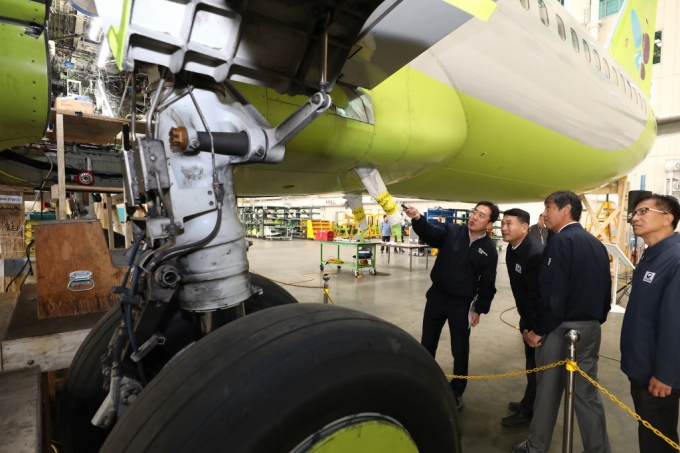 Aviation officials looking at a B737-NG plane operated by low-cost carrier Jin Air as it undergoes repair work on structural cracks in western Seoul on Nov. 11. (image: Ministry of Land, Infrastructure and Transport)

Aviation inspectors finished safety checks on 100 B737-NGs, including 42 jets that have flown more than 30,000 flights, by Sunday, with the remaining 50 planes subject to checks by Nov. 25, according to the Ministry of Land, Infrastructure and Transport.

The move comes after a B737-800NG jet operated by leading low-cost carrier Jeju Air Co. made an emergency return 10 minutes after takeoff from a local airport due to problems with the autopilot system on Oct. 25.

Moreover, South Korean airlines have recently reported a series of accidents such as delayed or suspended takeoffs due to faulty parts and a fire during preparations for takeoff.

The authorities have discovered structural cracks on 13 B737-NG planes and have since grounded them. A team of U.S. engineers flew to South Korea on Oct. 31 to help fix the problems, the ministry said.

The U.S team is now working on the five planes operated by Korean Air and the three by Jin Air, a ministry official said.

“Once the U.S. team completes the repair and replacement job of the faulty part, the U.S. Federal Aviation Administration (FAA) is scheduled to approve the outcome of the repair work. The affected planes will resume flights with an approval from the ministry,” he said.

Early in October, the FAA ordered aircraft operators to conduct checks on B737-NG airliners for structural cracks after Boeing discovered cracks on an aircraft undergoing modifications in China and notified the FAA of the issue.

Asiana Airlines and its two budget carriers, Air Seoul and Air Busan, do not operate B737-NG planes in their fleet, the official said.