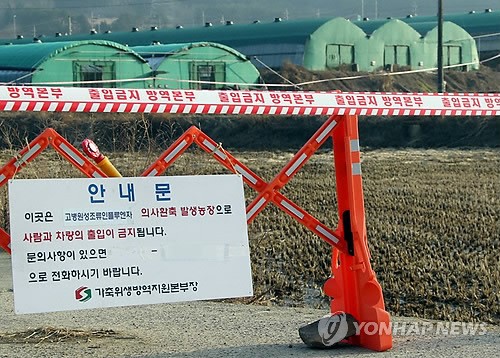 South Korea confirmed a rare case of avian influenza in a dog, the first of its kind since March 2014. (image: Yonhap)

SEJONG, Feb. 2 (Korea Bizwire) — South Korea confirmed a rare case of avian influenza (AI) in a dog Monday, the first of its kind in nearly a year.

According to the Ministry of Agriculture, Food and Rural Affairs, the animal disease has been confirmed in one of three dogs at a duck farm where the highly pathogenic H5N8 strain of bird flu was confirmed late last month.

“None of the three dogs had shown any symptoms of AI virus when their DNA samples were collected for tests, and two of them had no antigens or antibodies to the virus, partly confirming that there had not been dog-to-dog transmission of the virus,” the ministry said in a press release.

The ministry believes the infected dog may have consumed infected animals.

The case marks the first of its kind since March 2014 when 11 dogs at two infected farms tested positive for the poultry disease.

Ministry officials said there is little to no possibility of the particular strain of avian influenza affecting humans, noting no human infection of H5N8 virus has been reported globally.

“All 447 workers at the affected farms have been tested for the animal virus, but none have tested positive,” an official said at a press briefing.

Nearly 1.85 million animals, mostly ducks and chickens, have been culled since the latest outbreak of AI was reported in September, according to the ministry.