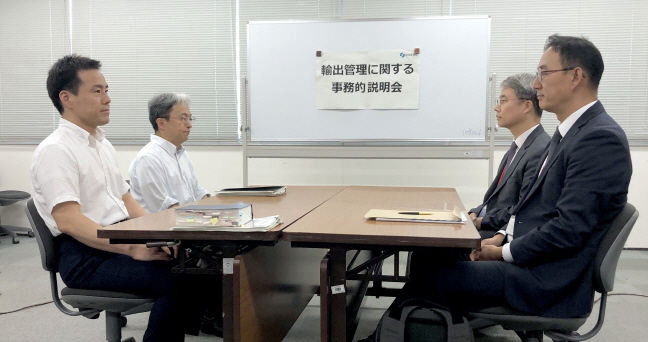 SEOUL, Jul. 15 (Korea Bizwire) — Trade tensions between South Korea and Japan are escalating as Tokyo seems to be preparing to expand the scope of its export controls beyond high-tech materials to a wide spectrum of areas, which could disrupt the global supply chain, industry watchers said Monday.

Tokyo’s move to exclude Seoul from its “whitelist” of countries on national security grounds would require Korean companies to seek export licenses for a wider range of technologies, which could result in additional costs and time.

South Korea is currently on the neighbor’s 27-nation whitelist, which includes the United States, Germany, Poland and Italy.

“If Japan removes South Korea from its whitelist, about 1,100 items are estimated to be affected by the new regulations,” a Seoul trade ministry official said, asking not to be named.

“We are closely analyzing the potential impact from Japan’s move on the South Korean industry.”

The Japanese government is expected to announce the decision on July 24 after a review process, which goes into effect 21 days later.

Seoul’s trade ministry proposed another meeting with its Japanese counterpart before the deadline to discuss the issue, after their first meeting Friday failed to mend the disputes.

But during the Friday meeting, the Japanese side did not clearly state whether it would accept the proposal.

The ministry said it will join efforts with the local industry to formally make counterarguments to Japan’s move to exclude South Korea from the whitelist, and also formally discuss Japan’s export curbs at the World Trade Organization’s general council meeting on July 23-24.

Japan’s additional measures could hit South Korea’s tech industry and economy hard as the semiconductor sector accounts for a fifth of exports in Asia’s fourth-largest economy.

Last week, global rating agency Standard & Poor’s slashed its growth forecast for South Korea’s economy this year to 2 percent due to rising uncertainty about the global trade outlook and weaker consumption, a sharp cut from its previous forecast of 2.4 percent in April.

The escalating trade spat between the closely intertwined Asian neighbors has also raised concerns over a disruption in the global supply chain as Korean chipmakers account for over 70 percent of the global memory chip output.

“Japan’s regulations on the whitelist cover a comprehensive list of items based on the arbitrary standards for national security concerns, adding uncertainties to Korean companies,” Kim Gyu-pan, a researcher at the state-run Korea Institute for International Economic Policy, said in a report.

“High-tech chemical materials and lithium-ion batteries, which are used in military applications, as well as some machine tools could be subject to fresh export curbs by Japan.”

The Korea Economic Research Institute (KERI) expects a 30 percent shortage in materials needed for semiconductor manufacturing could cut the gross domestic production (GDP) of South Korea and Japan by 2.2 percent and 0.04 percent, respectively.

Any retaliatory measures by Seoul would have a greater negative impact on both economies, the private think tank said.

“The trade spat is adding to the downside risk for the South Korean economy, already grappling with slowing growth in the wake of a trade war between the United States and China, and low productivity,” KERI President Kwon Tae-shin said.

“The government should promptly resolve the issue with Japan before it leads to a downgrade of corporate credit ratings and pressure on South Korea’s economic growth.” 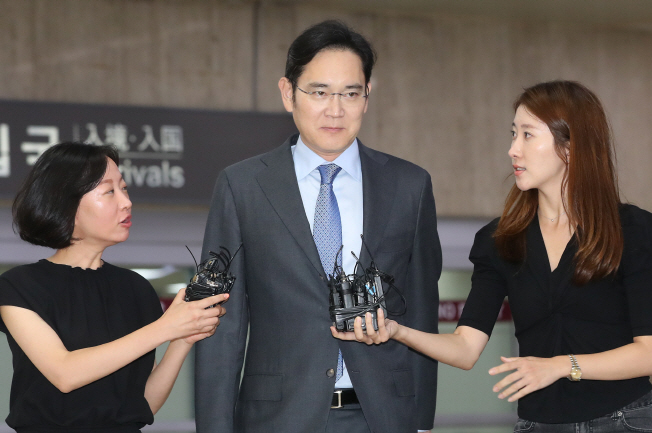 Samsung Electronics Co., the world’s largest memory chip and smartphone maker, may become a prime target if the scope of export controls expands beyond materials for chips and displays to other areas.

The Korean firm is a major supplier of global tech giants, including Apple and Huawei.

In the face of rising trade risks, Samsung Electronics Vice Chairman Lee Jae-yong last week visited Japan to minimize fallout from the export regulations of three materials to prevent a disruption of production in its facilities and order top executives to prepare scenarios from Japan’s expansion of export curbs.

During his six-day trip, Lee is known to have secured emergency stockpiles of some of the three materials to prevent operational problems at his company’s production facilities with existing inventories for a while, but it was unknown how Samsung will get the materials or how much it will get, according to industry sources.

“Lee succeeded in securing emergency stockpiles of some materials subject to Tokyo’s export restrictions, which could relieve the situation for now,” the source familiar with the matter said.

“But it wouldn’t be an ultimate solution as Japan is pushing to expand its export regulation to other materials as well.”

Industry watchers said Japan’s fresh export curbs could affect other companies that import materials for lithium-ion batteries, construction equipment and machine tools, but the impact will be limited as they can find alternative sources from other markets, KB Securities said.

“The impact of Japan’s export restriction on other sectors will be more limited than the semiconductor industry, which heavily relies on Japanese suppliers, which have a dominant market share,” KB Securities said in a report.

“Unlike the traditional trade conflict that imposes tariffs on the other side, Japan’s export curbs could reduce its trade surplus (with South Korea),” Kong Dong-rak, an analyst at Daishin Securities, said in a report.

“If the bilateral trade row deepens, Japan will also suffer a considerable economic loss as well.”