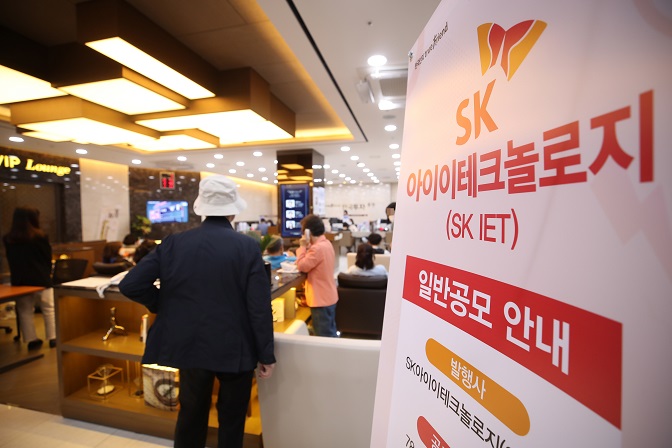 A Seoul branch office of Korea Investment & Securities Co. puts up a banner for SK IE Technology Co.’s initial public offering on the KOSPI market on April 28, 2021, on the first day of its two-day public subscription period. (Yonhap)

SKIET has received 80.9 trillion won (US$73.1 billion) of deposits from individual investors during the two-day subscription period, according to the data compiled by the firm’s bookrunner MiraeAsset Daewoo Securities.

The maker of lithium-ion battery separators has set the IPO price at 105,000 won (US$94.60) per share, which would help it raise 2.2 trillion won upon its debut on the KOSPI market on May 11.

The vaccine development subsidiary of SK Group has recently signed a contract with the U.S. vaccine developer Novavax for the consignment production of its COVID-19 vaccines.

Separators are one of the key components of EV batteries, which are important in preventing batteries from exploding in the charging process, and take up about 15-20 percent of battery production costs.

Last month, SKIET announced a 1.13 trillion-won investment plan to build two more separator plants at an existing complex in Poland to step up its production capacity. It also has factories in South Korea and China.