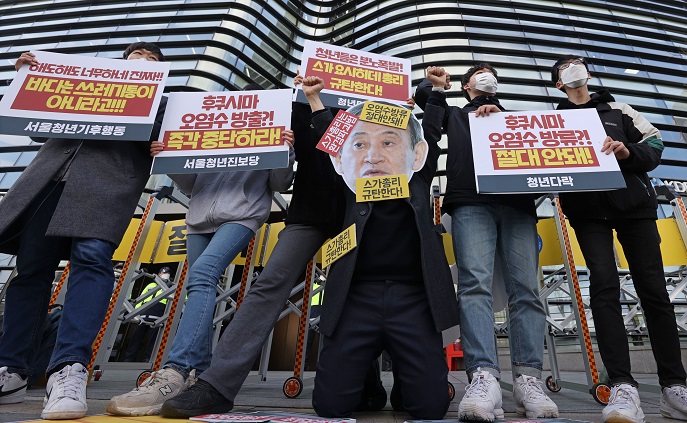 South Korean civic activists stage a protest against the Japanese government’s decision to discharge radioactive water from the crippled Fukushima nuclear plant into the Pacific Ocean during a news conference in front of the Japanese Embassy in Seoul on April 13, 2021. (Yonhap)

Tokyo announced earlier in the day that it plans to start releasing massive amounts of radioactive water, which has been stored in tanks at the wrecked Fukushima nuclear plant, in two years.

“The government expresses strong regret over the Japanese government’s decision to release contaminated water from the Fukushima nuclear plant into the ocean,” Koo said during a press conference held after the meeting.

He added that the government will take every necessary measures in line with the principle of keeping the South Korean people safe from the contaminated water from the Fukushima plant.

Seoul also “strongly urged” Tokyo to ensure the transparent disclosure and verification of information related to the overall treatment process of the contaminated water.

“In regard to (Tokyo’s) latest decision, we will clearly deliver our people’s protest to the Japanese government. We will demand specific measures from Japan to ensure the safety of our people and prevent damage to the marine environment,” Koo added.

Koo also said the government will refer its concerns to the International Atomic Energy Agency (IAEA) and request the international community to objectively review safety issues related to the Fukushima water release. 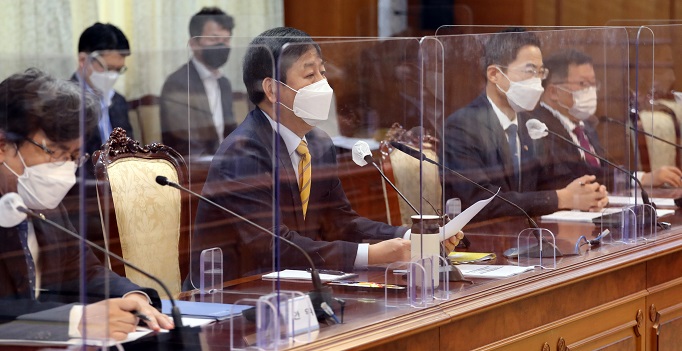 Koo Yoon-cheol (C), head of South Korea’s Office for Government Policy Coordination, presides over an emergency meeting at the government complex in Seoul on April 13, 2021, in relation to Tokyo’s decision earlier in the day to release radioactive water from the crippled Fukushima nuclear plant into the Pacific Ocean. (Yonhap)

In response to what appears to be Washington’s consent towards Tokyo’s decision, Koo said he believes that the U.S. State Department’s statement leaned more towards emphasizing the need for IAEA verification.

“We have delivered our concerns to the U.S., but the U.S. may react that way, since South Korea is a state neighor (of Japan) and the U.S. is located for more distant (than South Korea),” Koo said.

The U.S. State Department said in a website that Japan “has been transparent about its decision” on the Fukushima water release and that it “appears to have adopted an approach in accordance with globally accepted nuclear safety standards.”

Tokyo had been widely expected to announce its plan to gradually release into the Pacific Ocean more than 1.2 million tons of radioactive water stored in tanks since the 2011 meltdowns following an earthquake and tsunami.

Japan argues that it is the most realistic and relatively harmless disposal method, but the plan has sparked strong opposition and worries among the public in both Korea and Japan.

In a virtual press briefing for local media in March, a Japanese government official said Tokyo cannot continue to delay the disposal of contaminated water from the crippled Fukushima nuclear power plant due to tank storage limits. 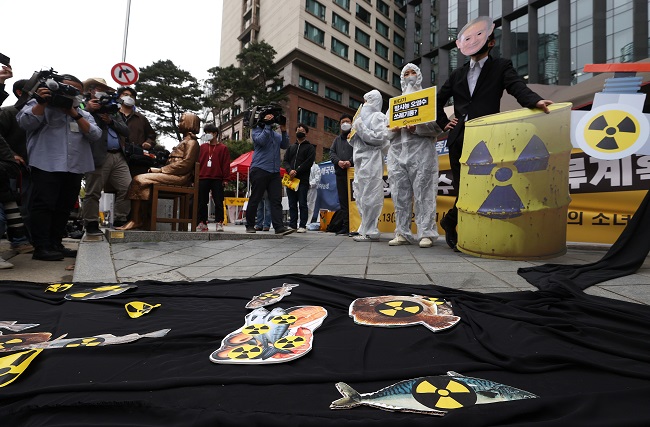 A protestor wearing a mask depicting Japanese Prime Minister Yoshihide Suga simulates the disposal of radioactive water into the ocean during a rally in front of the Japanese Embassy in Seoul on April 13, 2021, as environmental activists express their objection to the Japanese government’s decision to discharge water containing radioactive materials stored at the Fukushima nuclear power plant in Japan. (Yonhap)

“The unilateral decision to release contaminated water into the ocean despite opposition from the international community is a shameless and selfish act,” Choi Ji-eun, the ruling Democratic Party’s spokesperson for international affairs, said.

Won Hee-ryong, the governor of South Korea’s southern island of Jeju, also said he will call in Japan’s consul general for the island and form a contingency commission to deal with the water release with heads of local governments in the southeastern region.

Civic groups in South Korea also expressed resentment toward the Japanese government and pledged to do everything possible to prevent what they call “nuclear terror.”

“The Japanese government said it will gradually release radioactive water after diluting it to a level that is harmless to the human body. But diluting will not change the total amount of radioactive materials released into the sea,” an alliance of 31 anti-nuclear and environmental civic groups said in a joint statement.

The groups warned that the release of Fukushima water will become an irreparable disaster for humans beyond the marine ecosystem.