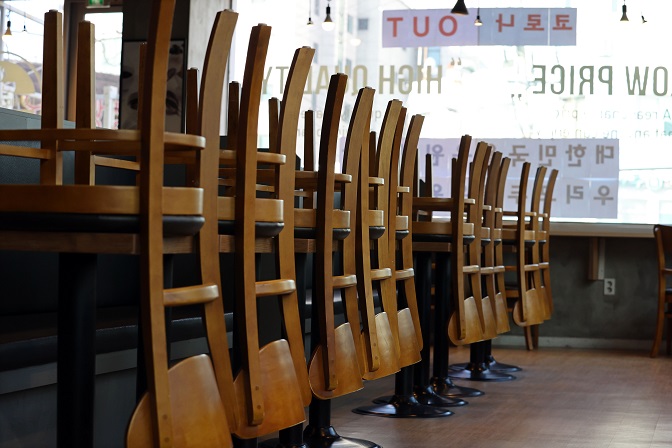 A coffee shop in Seoul is empty on Jan. 5, 2021, as Level 2.5 social distancing guidelines banned eating in cafes. (Yonhap)

Under the new measures taking effect Monday, the capital area will continue to enforce Level 2.5, the second highest in a five-tier system, and the rest of the nation will remain under Level 2.

“We debated seriously between the opinion that we should quickly restore everyday life by further tightening antivirus measures and the opinion that we can no longer neglect the suffering of small businesses,” he said while announcing the new measures during a meeting of the Central Disaster and Safety Countermeasure Headquarters.

Indoor gyms, cram schools and karaoke establishments in the capital area will be allowed to reopen on the condition that they strictly adhere to antivirus measures, including a maximum capacity of one person per 8 square meters and a closing time of 9 p.m.

Gyms will still be banned from holding classes for group exercises, such as Zumba dancing and aerobics. 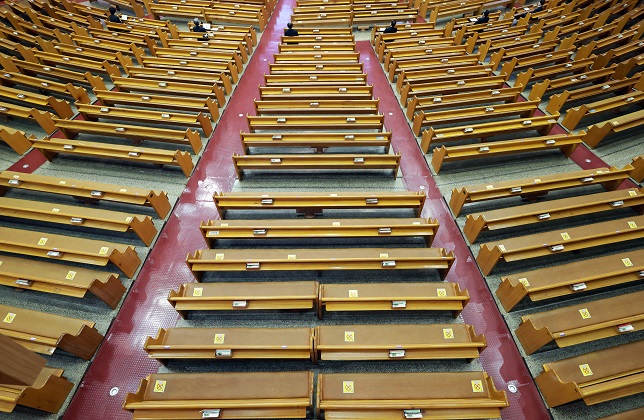 In this file photo, pews are nearly empty during a virtual Christmas service at Yoido Full Gospel Church in Seoul on Dec. 25, 2020. (Yonhap)

Businesses caught in violation of these rules will be issued a warning the first time and suspended for up to 10 days the second time.

Restrictions on cafes and houses of worship will also be eased in response to criticism that they are excessive, Chung said.

Like restaurants, cafes will be allowed to offer dine-in services until 9 p.m. Currently, coffee shops can serve only takeout and delivery.

“We are fully aware that the measures we announce today are not enough to restore people’s everyday lives and ease the suffering of small businesses owners,” the prime minister said, adding that help is on its way.

“The treatment and vaccines we are introducing next month will firmly support our everyday participation in antivirus measures,” he said.

At a press briefing, Health Minister Kwon Deok-cheol said it is too early to lower the social distancing level, even though the third wave of the pandemic has clearly entered a slowdown.

“With about two months left of winter, when the virus is especially active, there is a risk it will spread again if we relax our restrictions,” he said.

Kwon also announced that the government has designated Feb. 1-14 as a special antivirus period around the Lunar New Year.

During those two weeks, the government is looking into charging toll fees on expressways to discourage travel, he said.

Before the pandemic, the government made highways toll free during Lunar New Year’s Day and the fall harvest Chuseok holiday as part of efforts to promote traveling and domestic consumption.

The special period will see highway service areas ban dining in and offer only takeout. Train tickets will only be sold for window seats, and ferries will limit passengers to 50 percent capacity.