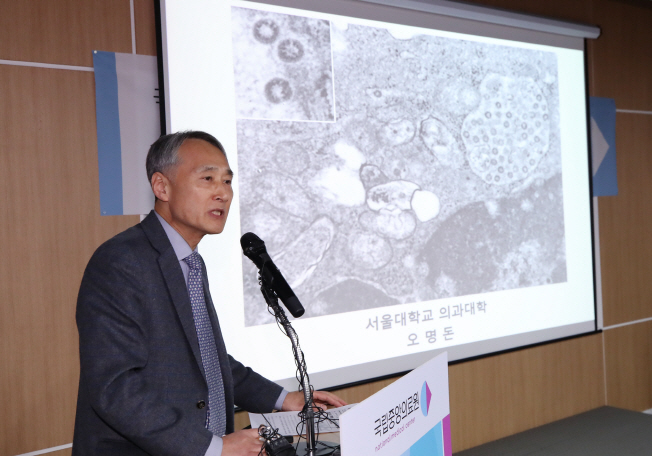 SEOUL, March 23 (Korea Bizwire) — South Korea is facing an increasingly pivotal time to decide whether or not to continue its current efforts to contain the new coronavirus, as the country can win the virus fight after more than half the national population develops immunity to COVID-19, experts said Monday.

“The outbreak will stop when 60 percent of the population becomes immune to the virus,” said Oh Myoung-don, head of the country’s central clinical committee for emerging disease control.

“Vaccination seems to be the only way to raise the level of immunity, but I think we need to wait about 12 months to see a COVID-19 vaccine available on the market,” Oh said.

The experts said that they do not expect so-called “herd immunity” to take place in South Korea.

Rather, they insisted that it is time for the country to decide whether to maintain its containment efforts or not, stressing that the country needs to reconsider its current quarantine policy.

Herd immunity refers to a scenario where enough people in a community develop immunity to a virus, so that transmission is halted.

Since its first confirmed case in late January, South Korea has been waging a hard battle to contain spread of the virus by preaching “social distancing,” under which school breaks have been extended for nearly one month and many companies have implemented remote working.

As a result of the nimble response to the virus, the country reported its lowest daily figure of new coronavirus infections since late last month on Monday.

The 64 new cases, which were detected Sunday, brought the nation’s total infections to 8,961, according to the Korea Centers for Disease Control and Prevention (KCDC).

The clinical committee, however, warned that there is a possibility that the country may see a surge in new coronavirus cases this fall if a vaccine or effective treatment drugs are not developed.

“We need to prepare enough medical equipment and protective gear in case the number of patients soars in the fall,” he said. “Ultimately, the government needs to step up in developments of vaccines and treatment drugs for COVID-19.”

Until the vaccine is developed, Oh said South Korea needs to focus on stemming imported cases and also review its quarantine strategy on cluster infections.

“So far, the country’s strategy has centered on curbing the spread of the virus and it controlled it to some extent” he said. “However, it will be difficult to continue to pursue that strategy.” 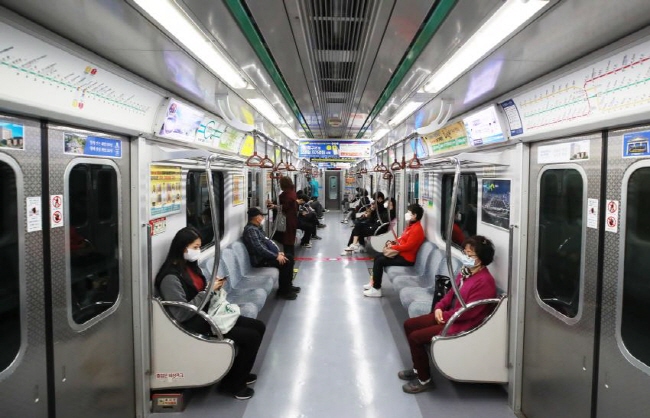 Passengers on a subway train in Seoul sit apart on March 23, 2020, as the government enforced two-week social distancing nationwide to prevent the spread of the new coronavirus. (Yonhap)

Starting Sunday, travelers from Europe were required to have a two-week quarantine period regardless of symptoms.

The country also urged people to suspend the operation of religious, indoor sports and entertainment facilities for 15 days until April 5.

“Whether to continue or ease the government’s virus curbing strategy needs to be carefully decided considering its impact from the economy to culture,” he said.

“The country’s quarantine policy needs to be based on scientific facts and people’s understandings.”

Oh said South Korea should be especially cautious of COVID-19 spreading at schools. The country’s new school year will begin on April 6 after the date was postponed several times.

The clinical committee also urged the government to set up a hospital specially designed for handling contagious diseases as soon as possible.

On the critical issue of finding treatment, doctors at Seoul National University Hospital and the National Medical Center said they have been conducting detailed clinical trials on Remdesivir, a drug developed by Gilead to treat Ebola.

“Remdesivir has been proven to be safe for use, but its effectiveness has not met expectations,” a source said.

Besides this, drug researchers have been checking Kaletra, made by AbbVie, which is used for human immunodeficiency virus (HIV), as well as malaria drugs Chloroquine and Hydroxychloroquine.

French scientists claimed that the malaria drugs proved to be effective against COVID-19.

The insider then said that more tests and detailed assessments need to be made on the safety and effectiveness of various treatment methods being checked, adding that doctors have used both the HIV drug and Chloroquine on elderly patients and those in serious condition, with no conclusion on their effectiveness having been reached so far.