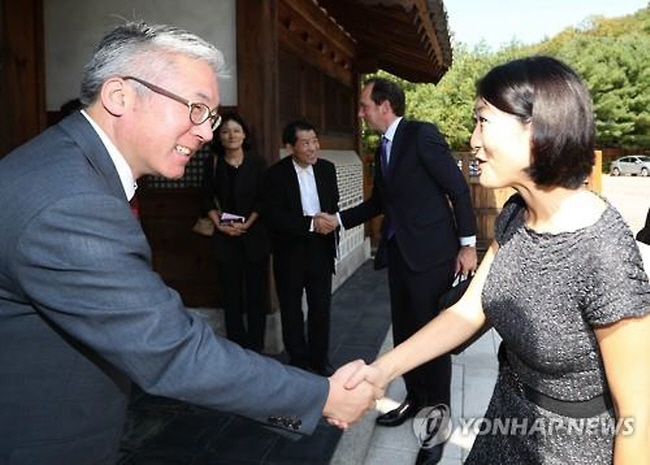 The bilateral commitment was made during a meeting between South Korean Culture Minister Kim Jong-deok and his visiting French counterpart, Fleur Pellerin, in Seoul earlier in the day.

“In order to deepen cultural ties, the two shared the need to establish a branch office within each other’s entity in charge of fostering the culture and supporting relevant businesses,” a ministry official said.

“Including the option, Seoul and Paris will seek a variety of ways for cultural exchanges and sign a memorandum of understanding as early as next month, when French President Francois Hollande plans to come here,” he added.

Pellerin is here to meet with Kim and to visit South Korea’s southern port city of Busan for the French film program as part of the ongoing Busan International Film Festival.

“Pellerin also expressed her hope for more active cooperation in making joint films, which has been pushed since 2007 but has shown few achievements,” another official said.’

As the European country’s first South Korean-born minister, she had shown her great interest in the beauty of Korea’s traditional housing and furniture, the official noted.

Pellerin, whose Korean name is Kim Jong-suk, was adopted by a French family in 1973, six months after her birth.

After serving as an adviser on Hollande’s campaign team, she was appointed in 2012 as the country’s minister for the digital economy for small companies. She then served as the secretary of state for trade and tourism promotion before taking office as the cultural minister in 2014.

Before her meeting with Kim, she received an honorary doctoral degree from Seoul’s Sookmyung Women’s University in recognition of her leadership in the European society.

In a special lecture to students after the ceremony, she vowed efforts to help Seoul and Paris “find novel, innovative fields through active cultural exchanges.”

The minister then gave the students a special lecture on the paradigm of the new economy based on digital technology.