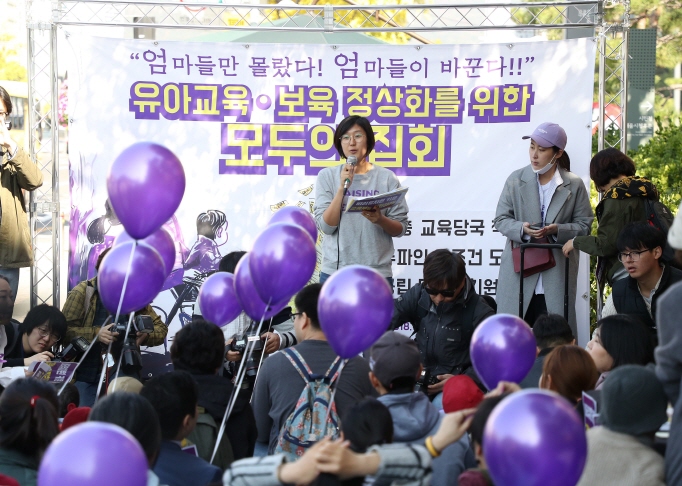 Parents and activists hold a rally in central Seoul to urge the government to tackle irregularities at private kindergartens on Oct. 20, 2018. (image: Yonhap)

SEOUL, Oct. 21 (Korea Bizwire) — Officials from the presidential office, the government and the ruling Democratic Party (DP) held a meeting Sunday to discuss ways to tackle irregularities at private kindergartens.

The closed-door meeting came amid growing public uproar sparked by revelations of preschool owners’ corruption by a lawmaker during a recent parliamentary audit of the education ministry.

Rep. Park Yong-jin from the DP unveiled a list of about 1,900 private kindergartens that were found to be involved in nearly 6,000 cases of accounting fraud, budget misappropriation and other irregularities during education authorities’ inspections from 2013-17.

Private preschools have been receiving state subsidies since 2012, in addition to tuition from parents. A number of owners of kindergartens misused taxpayer money for other purposes, including buying private items.

Participants in the Sunday meeting were considering applying a state accounting system for schools, called Edufine, to private kindergartens.

Currently, the system is used by public and private schools, as well as state-run kindergartens, but private preschools have opposed its adoption, as it would put their financial records under government scrutiny.

They also apparently discussed ways to conduct regular inspections into private kindergartens and to unveil a list of preschool owners who allegedly commit serious irregularities.

A set of comprehensive measures is expected to be unveiled on Thursday when senior officials from the DP and the government hold consultations on the issue.