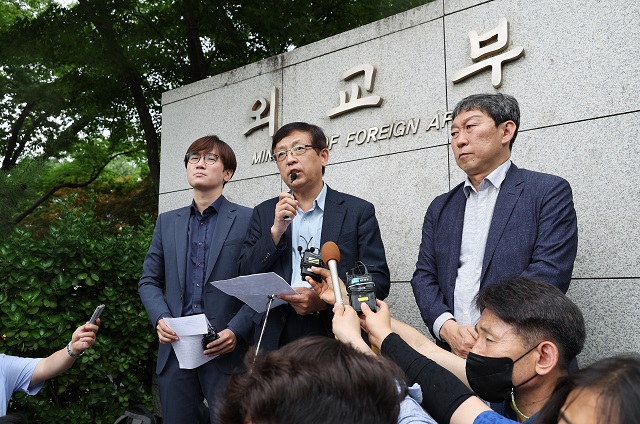 Legal representatives of Korean forced labor victims hold a press briefing in front of the main building of the Ministry of Foreign Affairs in Seoul on July 4, 2022, ahead of the first meeting of a consultative body composed of government officials, experts and other stakeholders. (Yonhap)

SEOUL, July 4 (Korea Bizwire) — South Korea launched a government-private consultative body Monday tasked with exploring ways to resolve the long-standing diplomatic row with Japan about compensation for the Korean victims of wartime forced labor, a sticking point in their relations.

First Vice Foreign Minister Cho Hyun-dong presided over the inaugural session of the body composed of government officials, experts and journalists, as well as legal representatives of the victims and their families, according to his ministry.

The ministry said in a statement the consultation was held to collect a broad range of opinions from various groups to draw “reasonable solutions.” The next meeting will be held later this month, the ministry added.

During the meeting, the 12 members exchanged opinions on how to resolve the issue in ways that satisfy both the victims and earn broad public support, according to a ministry official who attended the meeting.

It marks the beginning of the Yoon Suk-yeol administration’s full-fledged efforts to resolve the thorny matter and mend ties between the neighboring countries amid a stated push for strengthening trilateral security cooperation involving the United States.

Yoon took office in May following years of intensified Seoul-Tokyo stand-offs under the previous Moon Jae-in government over their shared history. The liberal Moon government openly sought a “victims-centered” approach.

They cited Japan’s official position that all reparation issues were settled under a 1965 accord to normalize bilateral diplomatic relations.

The Korean victims then filed suits to seize the Japanese firms’ assets here, and local courts have accepted their requests. But the liquidation process has not begun yet, as the companies have lodged appeals.

Finding a resolution to related disputes has gained urgency, with the Supreme Court’s final call expected in the coming weeks or months. Japanese officials have urged the South Korean government to come up with measures to avoid the liquidation of the companies’ assets.

Possible solutions suggested by observers include the creation of a fund with contributions from Korean and Japanese firms or the South Korean government compensating the victims on behalf of the Japanese companies.

It remains unclear whether the victims would accept such solutions as they have long demanded apology and compensation from the Japanese companies.

Ahead of the meeting, the victims’ legal representatives called for the Seoul government to make active diplomatic efforts to allow the victims and the Japanese companies to directly communicate over the issue.