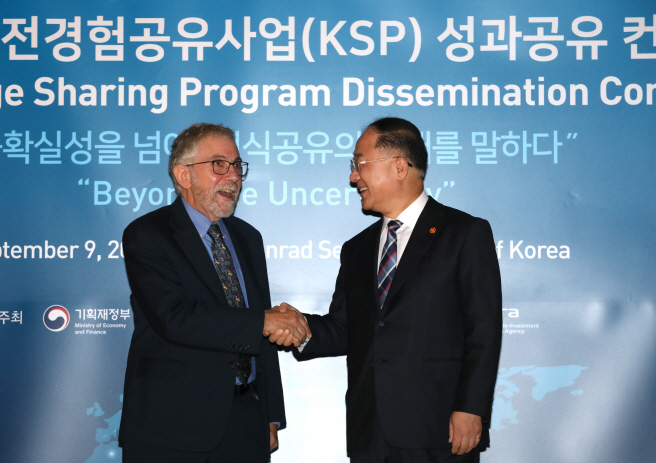 South Korean Finance Minister Hong Nam-ki (R) shakes hands with Paul Krugman, an economics professor at the City University of New York’s Graduate Center, at an international conference on a knowledge sharing program at a Seoul hotel on Sept. 9, 2019. (Yonhap)

“There are hints of a Japan-style slide into deflation, and you want to act boldly to prevent that from happening before it becomes embedded into the economy,” Krugman said in a meeting with reporters at a hotel in western Seoul.

He was in Seoul for an international conference on a knowledge sharing program and met with South Korean Finance Minister Hong Nam-ki.

The remarks came amid concerns that South Korea may experience deflation as the country’s consumer price growth hit a record low in August, staying below the 1 percent threshold for the eighth consecutive month.

The reading was the lowest since 1965, when the statistics agency started compiling data on consumer prices.

South Korea has proposed a record 513.5 trillion-won (US$423.7 billion) budget for 2020 to boost a slowing economy beset by a deepening U.S.-China trade row and more recently by its own with Japan.

The expansionary budget — which is subject to parliamentary approval — represents a 9.3 percent hike from 2019 and marks the second straight year that the budget proposal has risen by more than 9 percent.

Last week, South Korean officials said the economy was not experiencing deflation, noting that low inflation is mainly caused by supply-side factors, not demand-side ones.

The South Korean government has recently slashed its growth estimate for the year by 0.2 percentage point to between 2.4 percent and 2.5 percent. 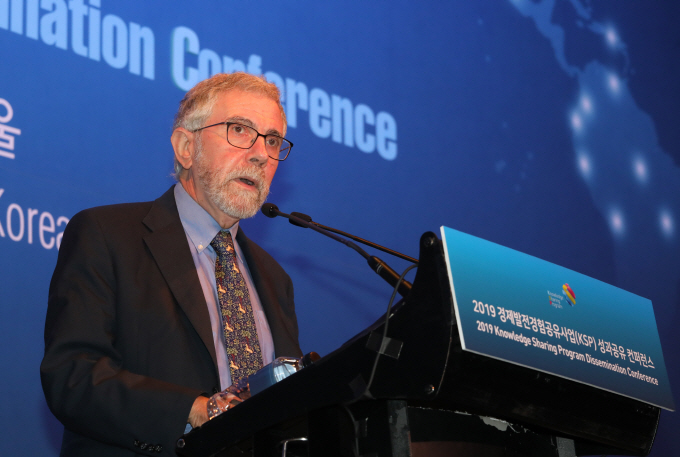 Nobel Prize-winning economist Paul Krugman speaks during the opening ceremony of a conference at a Seoul hotel on Sept. 9, 2019, to share the results of the Knowledge Sharing Program (KSP) projects. (Yonhap)

Also Monday, Hong said in a meeting with reporters that the government will mobilize all policy tools available to try to raise the country’s economic growth, though it will be difficult to achieve its 2.4 percent to 2.5 percent growth target.

Krugman said South Korea needs to protect itself against Japan’s trade curbs, noting, “It does appear that Japan is behaving oddly.”

In July, Tokyo imposed tighter regulations on exports to Seoul of three materials — resist, etching gas and fluorinated polyimide — that are critical for the production of semiconductors and flexible displays.

Concerns have mounted that Japan’s export curbs could add more uncertainty to and weigh on South Korea’s economy, already struggling with falling exports that have been in a slump since December.

Krugman said South Korea needs to maintain its position in the world of globalized supply if it can.

“Korea will be damaged by what’s happening, but you can try to at least limit that damage.”

Krugman said China may reach a tipping point where the world’s second-largest economy goes into an economic crisis, noting the Chinese economy remains highly unbalanced with unsustainably high investments and inadequate consumption, and it has been kept afloat through an unsustainable growth in credit.

“Perhaps someday, perhaps now, a trade war could be a trigger for a broader crisis. I am not betting on it, but it’s a real possibility,” he said.

“The great lesson of 2008 is that you never know just what dangers are lurking there,” he said, referring to the global financial crisis.