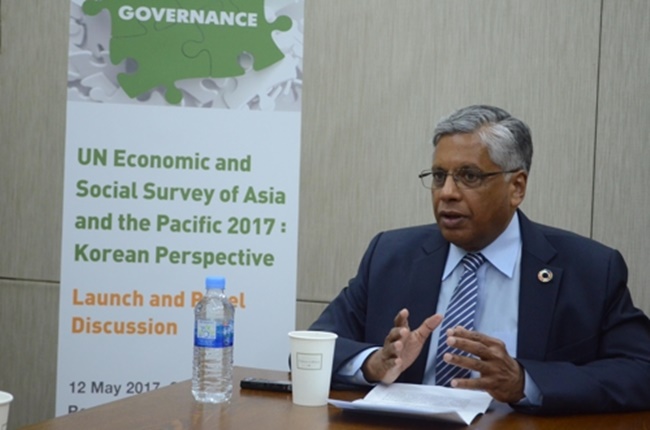 SEOUL, May 12 (Korea Bizwire) – South Korea’s new government needs to increase its tax revenues to help address economic and social challenges at a time when its economic recovery is still fragile, the head of the United Nations agency’s sub-regional office said Friday.

Kilaparti Ramakrishna, head and director of the U.N. Economic and Social Commission for Asia and the Pacific (UNESCAP) East and North-East Asia Office, also urged South Korea and other countries to accelerate structural reforms to navigate through a wave of trade protectionism.

Moon has pledged to create about 800,000 jobs in the public sector over the next five years, while increasing minimum wages and the basic pension for elderly people.

South Korea’s tax-to-GDP ratio stood at 24.6 percent, compared with the average of 34.2 percent among members of the Organization for Economic Cooperation and Development.

The new government needs to spend money on “various social issues” by “increasing the tax-to-GDP ratio,” Ramakrishna told Yonhap News Agency in an interview on the sidelines of a UNESCAP forum in Seoul.

Ramakrishna said South Korea’s new government is expected to put its priority on ensuring market stability and transparency, rather than radical changes in economic policies.

“I think it is fair to say that the new administration is not going to make a radical change in economic policies,” Ramakrishna said.

In a recent report on South Korea, the UNESCAP said South Korea’s export outlook is “fragile due to increased trade protectionism and trade-related disputes with China.”

U.S. President Donald Trump has said he will renegotiate or terminate a bilateral free trade deal with South Korea.

“Unfortunately, with the change of governments in a few countries, notably in the United States, you have trade protectionism rearing its head again,” he said.

Ramakrishna said South Korea and other nations in the region should take steps in terms of “fiscal policies, effective economic governance, structural reforms” to better cope with protectionism.