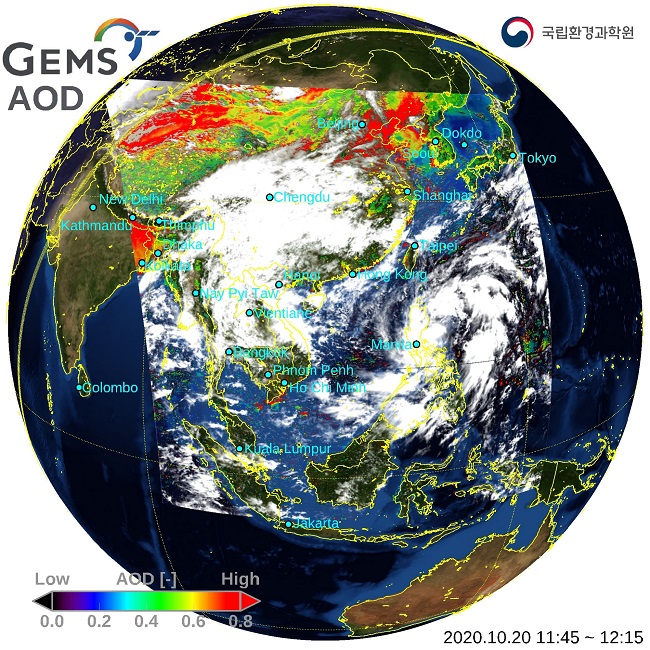 This image provided by the Ministry of Science and ICT on Nov. 18, 2020, shows high concentrations of fine dust, originating from China, over the Korean peninsula as observed by the Chollian-2B satellite on Oct. 20, 2020.

SEOUL, Nov. 18 (Korea Bizwire) — South Korea on Wednesday released satellite imagery showing the movement of fine dust from China to South Korea in the latest scientific evidence that China is partly to blame for poor air quality in the region.

The Chollian-2B, a South Korean environmental satellite, observed high concentrations of fine dust from China moving to the Korean Peninsula on Oct. 20, according to its imagery released by the Ministry of Science and ICT.

The move comes as South Korea and China work together to try to reduce fine dust emissions amid growing health concerns in South Korea.

Some particles less than 10 micrometers in diameter can get deep into lungs, and some may even get into the bloodstream.

Particles less than 2.5 micrometers in diameter, which are also known as fine particles or PM2.5 and are approximately 1/30th the average width of a human hair, pose the greatest risk to health, according to the U.S. Environmental Protection Agency.

Other imagery included high levels of nitrogen dioxide on Sept. 9 in industrial regions and major cities in East Asia, including South Korea’s capital, China’s Shenyang and Beijing and Japan’s Osaka. 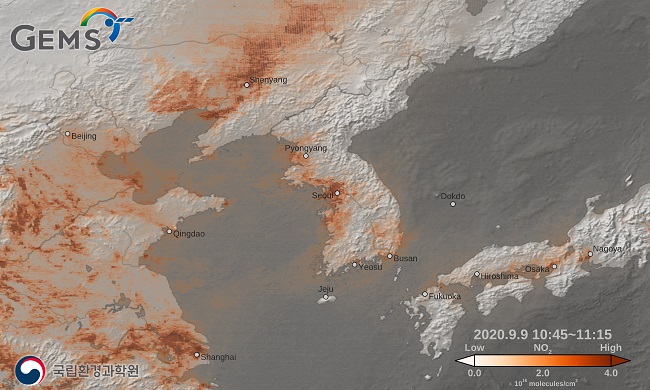 This image provided by the Ministry of Science and ICT on Nov. 18, 2020, shows nitrogen dioxide levels in South Korea, China and Japan as observed by the Chollian-2B satellite on Sept. 9, 2020.

The science ministry said it will release the satellite’s full observations after the first half of next year, following review by experts.

The Chollian-2B is equipped with a geostationary environment monitoring spectrometer that allows observation of air pollutants such as nitrogen dioxide, sulfur dioxide and ozone.

The satellite has a 10-year life cycle and can observe around 20 countries across Asia from India to Japan.

The science ministry said it plans to share the data with 13 other countries in the region, including Thailand and Indonesia.