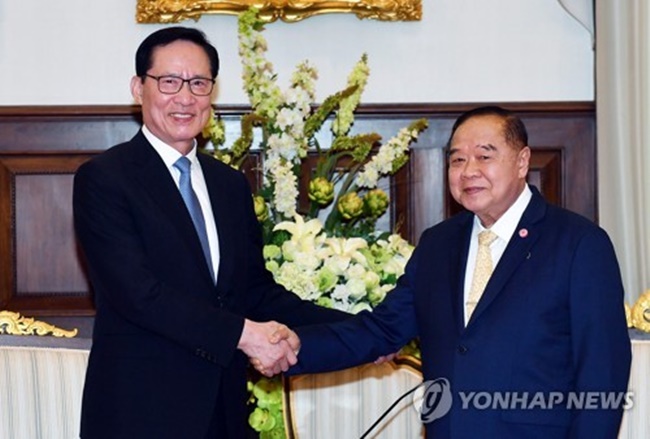 In talks with his Thai counterpart, Prawit Wongsuwon, in Bangkok, Defense Minister Song Young-moo reaffirmed South Korea’s bid to supply the Southeast Asian nation with another frigate, according to Song’s ministry. (Image: Yonhap)

In talks with his Thai counterpart, Prawit Wongsuwon, in Bangkok, Defense Minister Song Young-moo reaffirmed South Korea’s bid to supply the Southeast Asian nation with another frigate, according to Song’s ministry.

It decided to buy eight more T-50s last year in a deal reportedly worth around US$260 million.

Song told the Thai minister that the country’s Air Force is expected to bolster its combat power via the operation of the aircraft.

South Korea has a separate agreement to sell a 3,650-ton multi-mission frigate to Thailand, one of its major arms markets.

Song was quoted as telling him that South Korea hopes to contribute to the modernization of the country’s military, and the strengthening of its maritime security, by participating in its second frigate acquisition program.

Song pointed out decades-long defense ties between the two sides, as Thailand dispatched troops to help South Korea defend itself from North Korea’s aggression in the 1950-53 Korean War.

Song also paid a courtesy call on Prime Minister Prayuth Chan-ocha before wrapping up his trip to Thailand, the last leg of his three-nation tour of the region, which also took him to Singapore and Indonesia.