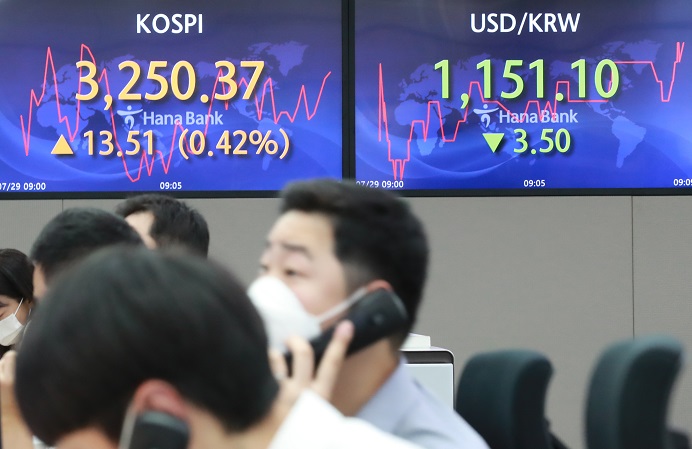 This photo, taken July 29, 2021, shows electronic signboards at a Hana Bank dealing room in Seoul that show the trading of Korean stocks and the local currency. (Yonhap)

SEOUL, July 30 (Korea Bizwire) — Samsung Electronics Co., Apple Inc. and Kakao Corp. were the three most popular stocks bought by the MZ generation in the early half of this year, a survey said Thursday.

Shinhan Investment Corp., one of South Korea’s major financial investment companies, conducted a survey of 400,000 investors who opened new accounts this year remotely, more than half of whom were members of the so-called MZ generation, with 33 percent in their 20s and 27 percent in their 30s.

The gender ratio of new investors this year was equal, indicating that gender had no influence on interest in financial investment.

Among MZ generation investors, 37 percent bought stocks from Samsung Electronics more than once. Samsung was followed by Apple (16 percent) and Kakao (14 percent).

Shinhan Investment reported a 168 percent increase in the number of new customers opening accounts this year through remote means.