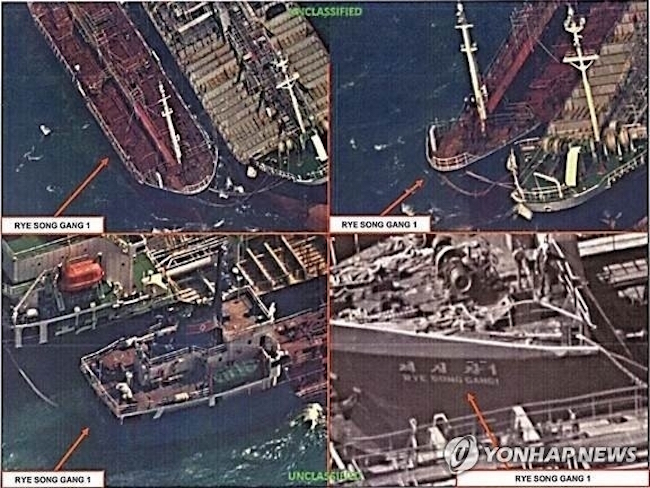 South Korean customs authorities took and searched the vessel, Lighthouse Winmore, when it entered the country’s Yeosu Port on Nov. 24 after transferring 600 tons of refined petroleum to a North Korean vessel on Oct. 19, the officials said. (Image: Yonhap)

South Korean customs authorities took and searched the vessel, Lighthouse Winmore, when it entered the country’s Yeosu Port on Nov. 24 after transferring 600 tons of refined petroleum to a North Korean vessel on Oct. 19, the officials said.

UNSC Resolution 2375, adopted in September, bans member countries from ship-to-ship transfer of any goods for North Korea. Resolution 2397, adopted just a week earlier allows a country to capture and look into a vessel suspected of engaging in prohibited activities with North Korea.

The Hong Kong-flagged ship was chartered by Taiwanese company Billions Bunker Group and previously visited South Korea’s Yeosu Port on Oct. 11 to load up on Japanese refined petroleum and head to its claimed destination in Taiwan four days later, the authorities noted.

Instead of going to Taiwan, however, the vessel transferred the oil to a North Korean ship, the Sam Jong 2, and three other non-North Korean vessels in international waters in the East China Sea, they said.

“The actions taken will be reported to the UNSC sanctions committee on North Korea in the future,” according to the authorities. “This marks a typical case of North Korea shrewdly circumventing UNSC sanctions by using its illegal networks.”

The officials said South Korea has shared intelligence with the U.S. for the detection of the illegal transaction.

In their search of the seized vessel, South Korean authorities secured navigation logs and testimony from the crew that the oil transaction was ordered by the Taiwanese group through the vessel’s caption. But motive of the transaction with North Korea is not known, the officials noted.

South Korea will be keeping the Hong Kong-flagged vessel for about six months, during which time Hong Kong is expected to file a request for the ship’s release with the UNSC’s sanctions committee on North Korea.

The U.S. has reportedly called on the UNSC to blacklist 10 ships for engaging in proscribed trade with North Korea although China and Russia are opposed to that. Lighthouse Winmore was reportedly one of the 10 targeted ships. The Security Council sanctions committee will make a decision on the request on Friday (New York time), according to the officials.