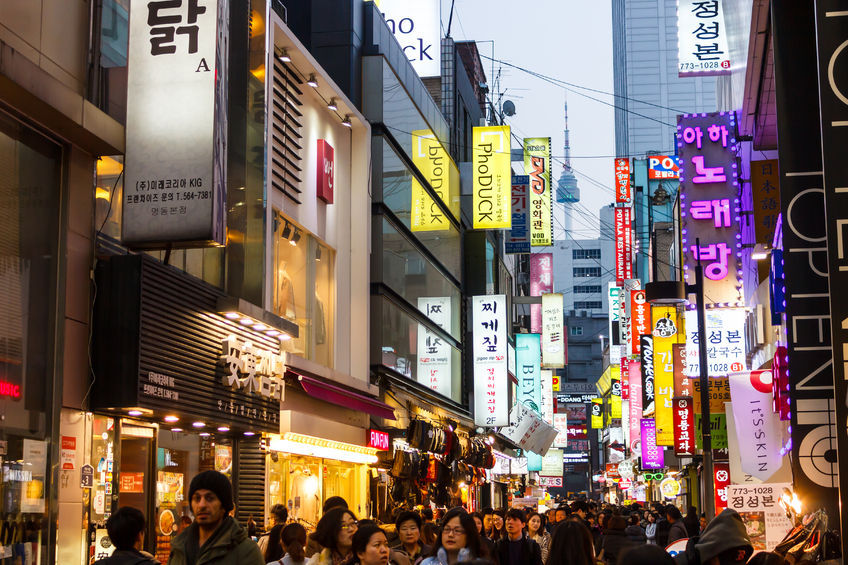 The number of Chinese travelers has increasingly recovered to the previous year’s level since late August and marked an on-year rise since mid-September. (image: Korea Bizwire)

SEOUL, Sept. 21 (Korea Bizwire) — South Korea’s retail and tourism industries are preparing a slew of promotional and cultural events to woo back Chinese travelers during a long-haul holiday season, pinning their hopes on making up for a summer slump in the wake of a viral respiratory illness, sources said Monday.

Since the first outbreak in late May, Middle East Respiratory Syndrome (MERS) made a big dent on domestic spending as foreign tourists canceled their planned trips during the peak summer season, while South Koreans avoided shopping centers and other crowded places in June and July.

While the viral disease hit the tourism and retail industry hard, Chinese tourists have started to return to the once-empty streets of Myeongdong, one of the capital’s most popular shopping districts, over the past month.’

The number of Chinese travelers has increasingly recovered to the previous year’s level since late August and marked an on-year rise since mid-September, the state-run Korea Tourism Organization (KTO) said.

About 303,000 tourists with Chinese nationality entered the nation in the first two weeks of September, rising 4.8 percent compared with the same period a year ago, it said.

“The number of Chinese travelers has sharply risen this month, and the number is expected to completely recover during the Chinese holiday season,” Han Hwa-joon, who oversees the KTO’s Shanghai branch, said. “The recovery pace is faster than expected.”

Chinese Thanksgiving falls on Sept. 26-27, and together with the Chinese National Holiday running from Oct. 1-7, the holiday season can be extended up to 12 days.

As the Chinese holiday season draws near, major shopping centers and duty-free operators are making all-out efforts to draw Chinese tourists to make up for a shortfall in sales amid dormant domestic spending.

According to the KTO, 164,000 Chinese travelers visited the nation during last year’s autumn holiday season and spent 2.4 million won on average, which amounts to about 400 billion won (US$341.5 million) in total.

During this year’s Chinese National Holiday, the tourism agency expected some 210,000 Chinese will visit the nation, up 30 percent from a year ago, considering the pace of growth over the past three years.

“We will host a variety of events even after the Chinese holiday to make up for the fall in tourists during the peak season from June to August,” said Seo Young-chung, a KTO official in charge of Chinese tourism.

Shinsegae, the nation’s leading department chain, said it will give special discounts to Chinese customers, while Hyundai Department Store also started the regular sale season earlier than usual to attract the deep-pocketed travelers.

Operators of duty-free shops have also stepped up efforts to bring back Chinese travelers, the largest consumer group, which accounted for about 70 percent of downtown duty-free spending last year, up from around 15 percent in 2011.

Hotel Shilla, part of Samsung Group and the world’s No. 6 duty-free operator, also presented various sales promotions and tour packages during the fair along with other Samsung units, with the attendance of senior officials.

“The Korean tourism industry has mostly recovered after the MERS outbreak came under control, and it will make a full recovery in September,” Hotel Shilla CEO Lee Bu-jin told reporters during her visit to Shanghai.