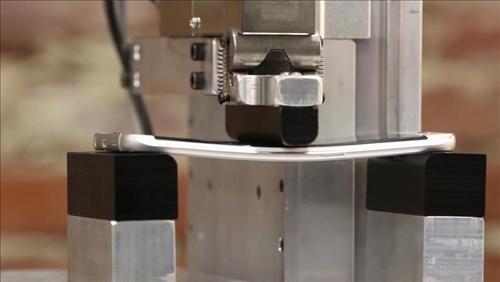 “The Samsung Galaxy S6 Edge deformed at 110 pounds (49.8 kilograms) and created a crack in the screen. When pushed to catastrophic failure, its breaking point was 149 pounds, at which point it ceased to function,” said protection-plan provider SquareTrade.

In September, when concerns escalated over the fragile iPhone 6 Plus, Samsung took advantage of the situation by promoting its Galaxy Note Edge, the first edition of its smartphone with a curved-end display, by posting “Curved. Not bent” through its official Twitter account.

“The Apple iPhone 6 Plus deformation occurred at 110 pounds, but it continued to function normally. When pushed to catastrophic failure, its breaking point was an impressive 179 pounds,” it added.

SquareTrade said concerns over the possible bending or malfunctioning of smart devices has been rising as tech firms rushed to make their devices thinner, which has made consumers pay more attention to their possible fragility.

Samsung, however, said such claims are “seriously misleading.”

“A situation in which 50 kilograms of pressure is imposed on a smartphone cannot happen in an everyday situation,” Seoul-based Samsung Electronics said.

“Our test results showed that the Galaxy S6 and the Galaxy S6 Edge can resist 36 kilograms of pressure, which is enough to break five pencils,” it said, adding that SquareTrade also should have tested both sides of the phone, as its test only imposed pressure on the front side.

“As SquareTrade only tested one side, its test lacked credibility and failed to reflect the overall environment,” Samsung said.

The Galaxy S6 Edge, set to be launched on Friday, has been grabbing the market’s attention with the industry’s first screen that is curved on both ends, providing users with a wider view. This was an upgrade from the Galaxy Note Edge, which has a curved screen on only one side.