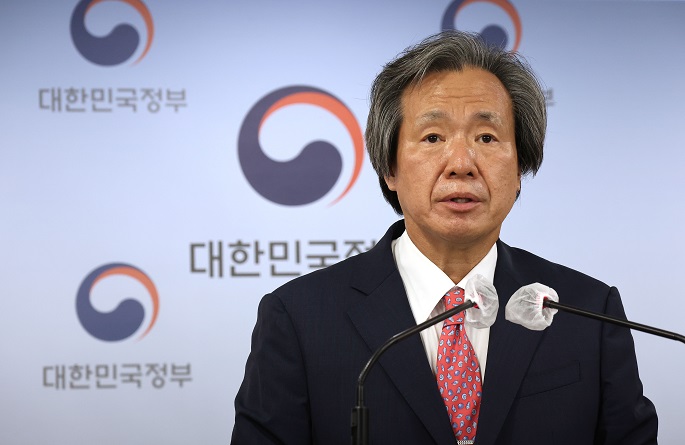 Jung Ki-suck, the chairperson of the National Advisory Committee for the Infectious Disease Crisis Response, speaks to the press during a regular briefing on Sept. 16, 2022. (Yonhap)

SEOUL, Sept. 16 (Korea Bizwire) — South Korea should prepare to gradually end COVID-19 emergency response system in a step toward the people’s return to normalcy amid a moderate declining trend of the virus, an adviser said Friday.

South Korea reported 51,874 new COVID-19 cases, including 348 from overseas, earlier in the day, bringing the total to 24,316,302, the Korea Disease Control and Prevention Agency (KDCA) said.

Jung Ki-suck, a civilian adviser to the government task force on the pandemic, made the case for dealing with the pandemic in a normal manner from an emergency response system, citing the transition in major countries.

“We should prepare an exit strategy” from the COVID-19 pandemic, Jung said in a briefing, adding major countries, including the United States, Britain, Germany and France, have lifted indoor mask mandates except for several facilities.

The World Health Organization has also declared the end of the pandemic is in sight.

Jung said South Korea should not be left behind when the global pandemic ends to bolster the nation’s trade-dependent economy, saying global trade could return to normal in the next six months.

Jung said South Korea could handle COVID-19 like a seasonal flu, considering its medical response system and a downward trend of the fatality rate and proportion of critically ill patients.

South Korea’s COVID-19 fatality rate has recently dropped to 0.04 percent, compared with 2.1 percent in the early stages of the pandemic.

The number of critically ill patients stood at 516, up 25 from the previous day.

Separately, the government said it will give a green light to use the nation’s first homegrown COVID-19 vaccine, SKYCovione, as a booster shot.

Developed by SK Bioscience Co., the vaccine was previously allowed only to be administered as one of the two main inoculations.

As of 9 p.m. on Friday, the country had reported 41,902 additional cases, down 8,249 from the same time the previous day. Daily cases are counted until midnight and announced the following morning.