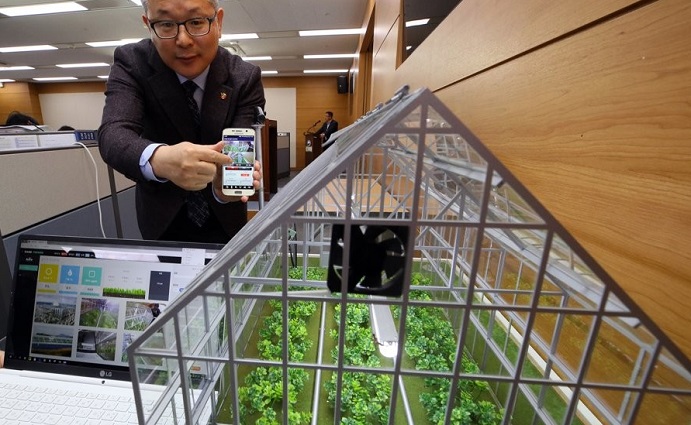 Im Hui-taek, director-general of the Foundation of Agri, Tech, Commercialization & Transfer, talks about smart farm packages at the government complex in Sejong, some 120 kilometers south of Seoul, on March 19, 2019. (Yonhap)

SEOUL, May 24 (Korea Bizwire) — South Korea’s agricultural ministry said Monday it has launched a pilot project to build a smart farm in Kazakhstan, as the country seeks to boost exports of smart-farming solutions.

The construction is expected to be completed in October, according to the Ministry of Agriculture, Food and Rural Affairs.

The smart farm, sized 1 hectare, will be used to cultivate popular produce in Kazakhstan, including tomatoes, cucumbers and strawberries.

The smart farm was specifically designed to cope with heavy rain and snow in Almaty.

The ministry earlier designated a consortium led by Nare Trend Inc., a South Korean agricultural technology company, to carry out the project.

South Korea hopes to penetrate deeper into the global market for smart farming facilities through the pilot project.