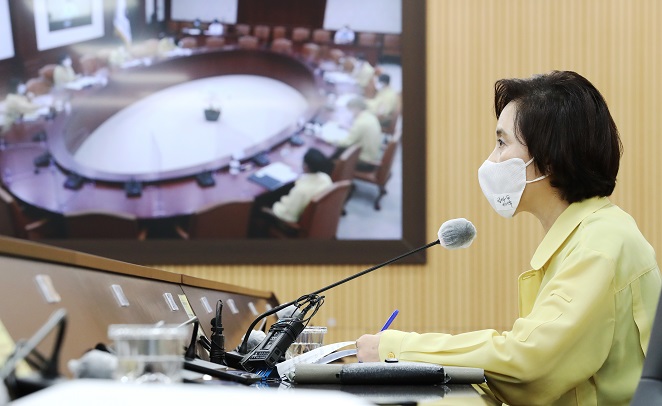 Education Minister Yoo Eun-hae speaks during an inter-ministerial teleconference on social issues in the central city of Sejong on Sept. 9, 2020. (Yonhap)

During an inter-ministerial meeting on social issues, the Ministry of Education presented a series of measures to promote remote learning based on digital technologies in the COVID-19 era.

“We will draw up detailed measures, such as requirements for participating schools, in the second half of this year,” a ministry official said. “The programs will be initiated as early as the first half of next year.”

Medical and law schools will be excluded from the policy, the ministry added.

The ministry also reported that it will remove a regulation that limits remote classes to 20 percent of total credits and leave universities to decide on the proportion of online learning. The restriction will be scrapped in the second half of the year. 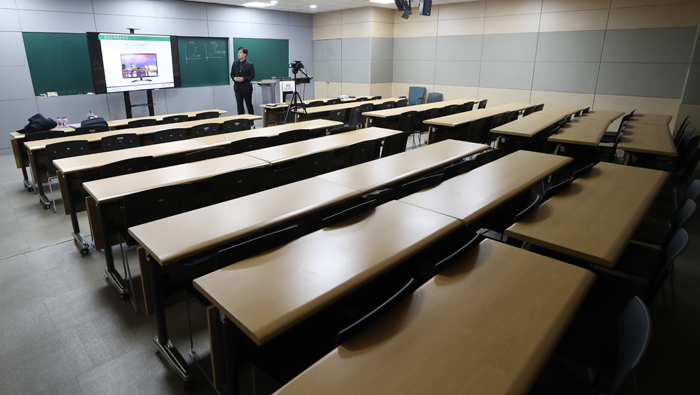 Jeon Eun-chae, a professor at the University of Ulsan in Ulsan, 414 kilometers southeast of Seoul, records his lectures in one of the school’s lecture rooms on March 12, 2020. (Yonhap)

Most universities have switched to online since the new coronavirus hit the country early this year.

To improve the quality of online classes, the ministry plans to instruct schools to operate a center that provides technical support to teachers and run monitoring panels of students, teachers and experts.

Authorities will allow universities to run non-in-person field training courses using augmented reality and virtual reality technologies. Related regulations will be revised in the second half of the year, the ministry said.

Also discussed at the meeting was a plan to assist universities in education of new technologies, including artificial intelligence and big data, with an aim to nurture 100,000 experts in such fields by 2026.

Meanwhile, the Ministry of Culture, Sports and Tourism announced separate plans to help local artists and producers develop new online content and switch their offline activities to online ones.

In cooperation with the education ministry in expanding the online-based education system through cultural content, the culture ministry said it will develop educational materials using music, fine art and dance, and contactless curriculum focusing on experiencing online content.