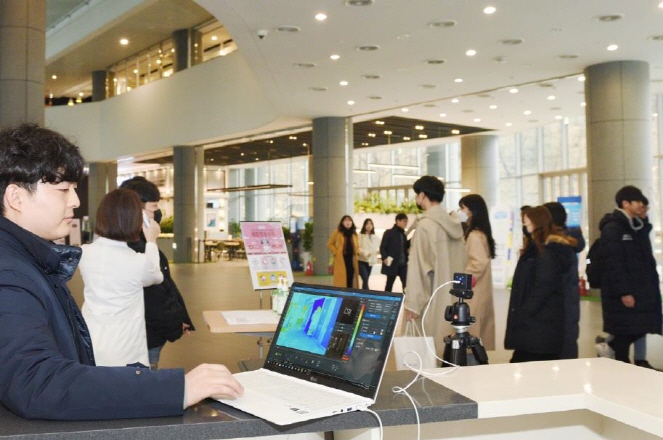 This photo provided by Chung-Ang University shows a thermal imaging camera installed at the school’s dormitory.

SEOUL, Feb. 29 (Korea Bizwire) — More universities in Seoul are seeking to replace in-person classes with online lectures due to fears over coronavirus infection.

South Korean universities have postponed the start of the spring semester, scheduled for next Monday, by two weeks under the recommendation of the Ministry of Education.

With the COVID-19 crisis escalating, a dozen universities in the capital have decided to keep students away from campuses for longer by offering remote learning for the first two weeks, after the new semester begins on March 16.

As of 4 p.m. Friday, South Korea had confirmed 2,337 coronavirus infections, with 571 new cases reported during the day. The death toll remained unchanged at 13.

Yonsei University said Friday that recorded video lectures, real-time telelectures and other learning materials will be provided instead of face-to-face classes until March 28.

Ewha Womans University also said it will conduct all classes via remote learning for the first two weeks of the semester. At least 10 other schools notified students of similar plans.

Seoul National University (SNU) and several other institutions are also considering online classes. SNU said it will make a decision next week.