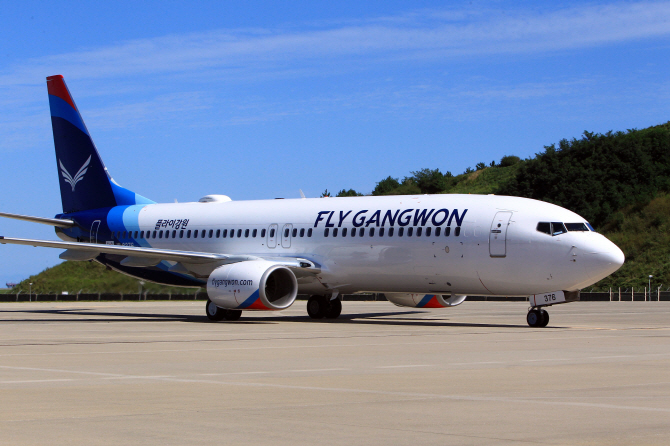 Fly Gangwon will operate two 737-800 jets on the Yangyang-Jeju route this year. (Yonhap)

An air operator certificate to be issued to Fly Gangwon on Tuesday will allow the carrier to offer two flights a day on the Yangyang-Jeju route beginning in November, the Ministry of Land, Infrastructure and Transport said in a statement.

“The aviation authorities will closely monitor the new airline’s flight preparations, pilot schedules, airplane repairs and maintenance, and others during the first month of operations,” a ministry official said.

The authorities will conduct a comprehensive safety check on Fly Gangwon’s planes and flight programs six months after it starts operations, he said.

Fly Gangwon will operate two 737-800 jets on the Yangyang-Jeju route this year and bring in five more 737-800 chartered planes next year to serve routes to Taiwan, China and Southeast Asia, a company spokesman said.

The budget carrier’s route plans are subject to approval from the transport ministry.

Fly Gangwon is headquartered in Yangyang, Gangwon Province, about 220 kilometers east of Seoul.