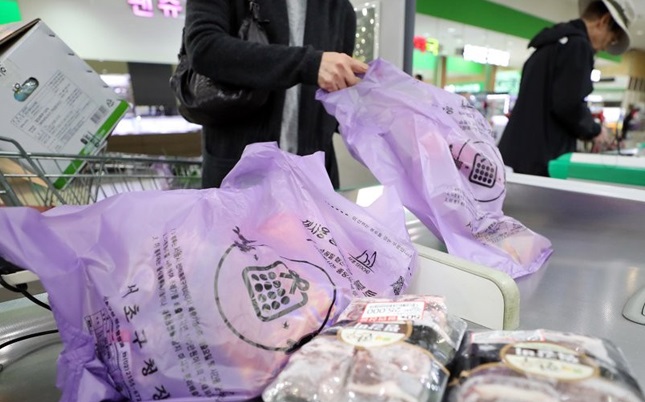 The ban will come into effect on Tuesday as part of a revised law on conserving resources and encouraging the reuse of recyclable waste.

Subject to the ban are 2,000 outlets of major discount chains and 11,000 supermarkets with sales floor spaces of 165 square meters or more where handing out free plastic bags are currently prohibited.

Stores that violate the ban could face fines of up to 3 million won (around US$2,683). Instead, those shops are required to offer customers recyclable containers, cloth shopping bags or paper bags.

Plastic containers for wet goods, such as meat and fish, will still be used.

Under the revised law, 18,000 bakeries nationwide will be barred from handing out free disposable plastic bags.

In cooperation with local governments, the Environment Ministry plans to encourage the affected stores to observe the ban from January through March.

The ministry is also pushing ahead with a plan to reduce the use of plastic garment bags at laundry shops.