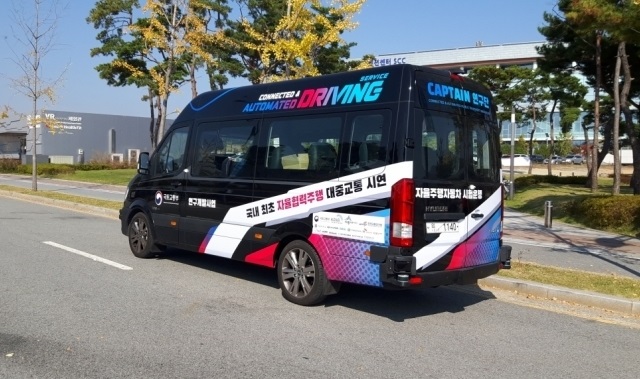 A bus with Level 3 autonomous driving technology running on a road in a government-led pilot project in Sejong City, an administrative hub 130 kilometers southeast of Seoul. (image: Ministry of Land, Infrastructure and Transport)

SEOUL, Oct. 28 (Korea Bizwire) — South Korea said Monday that it will put autonomous buses into commercial service in its administrative hub of Sejong by 2023 as the government seeks to foster future vehicles as a new growth engine.

The government will begin operating a bus with Level 3 autonomous driving technology in a pilot project next month and increase the number to two by December, the Ministry of Land, Infrastructure and Transport said in a statement.

“We are planning to operate eight buses with Level 4 autonomous technology in 2021 and to offer local residents an opportunity to experience the self-driving bus,” a ministry official said over the phone.

A Level 3 car, if fully developed, can change lanes and carry out other autonomous driving functions without intervention by the driver.