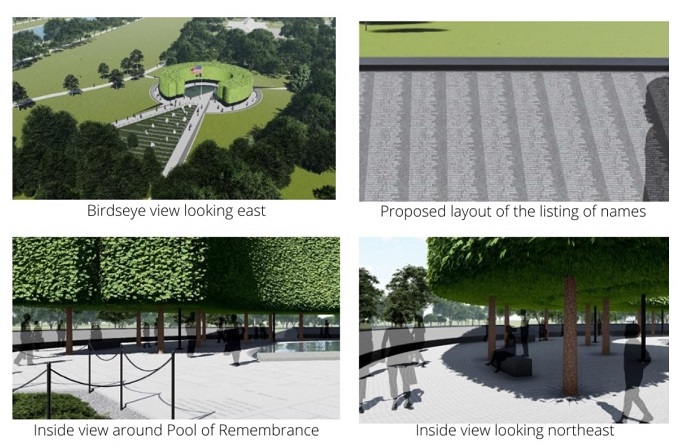 This file photo from the website of the Korean War Veterans Memorial Foundation shows a blueprint for the envisioned “Memorial Wall of Remembrance” to be constructed in Washington.

SEOUL, March 9 (Korea Bizwire) — South Korea plans to hold a ceremony to break ground for the construction of a memorial wall in Washington later this year to honor U.S. veterans who fought in the 1950-53 Korean War, the veterans affairs ministry here said Tuesday.

Seoul has been working on the project to construct the “Memorial Wall of Remembrance” in Washington by 2022 to convey its appreciation to the American veterans’ sacrifice and commitment during the war.

The wall is to be built in West Potomac Park, where the Korean War Veterans Memorial is located, with the names of some 36,000 American veterans who fought in the war etched on it.

“In the second half of the year, the groundbreaking ceremony will take place, along with a Korea-U.S. alliance seminar and other events,” the ministry said in a release.

During the war, the United States led the Allied Forces to help South Korea repel troops invading from the North. More than 36,000 American soldiers were killed, and 103,000 wounded.

The ministry added that it also plans to hold seminars on the Korea-U.S. alliance in Hawaii and Seoul this year, through which the two nations are expected to further cement their bilateral relations.

“We are also planning to launch diverse projects for international veterans, such as inviting them to Seoul, along with retired U.S. Forces Korea (USFK) service members and former United Nations Command members. We will push for the projects in consideration of the COVID-19 situation,” a ministry official said.

For the successful implementation of such projects, Minister Hwang Ki-Chul had a meeting with former USFK commander Vincent Brooks, who now leads the Korea Defense Veterans Association (KDVA), on Tuesday and discussed ways to cooperate, according to the ministry.

KDVA was founded in 2017 as a nonprofit organization to advocate for the alliance and support the American and Korean military personnel who served or continue to serve it.