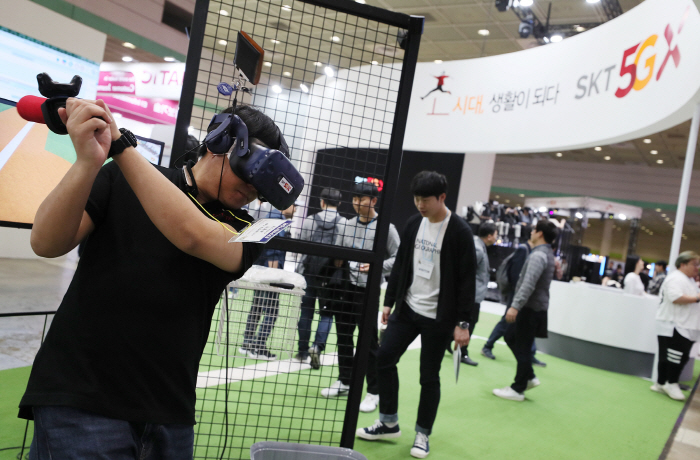 People trying out virtual reality baseball at the World IT Show at the COEX exhibition center in southern Seoul on April 24, 2019. (Yonhap)

SEOUL, May 2 (Korea Bizwire) — South Korea will create a fund worth 30 billion won (US$26 million) to help nurture immersive content for the super-fast 5G network, the government said Thursday.

The fund, to be launched this month, aims to form an early market for immersive content and bolster the competitiveness of local tech ventures and smaller firms in this field, according to the Ministry of Science and ICT.

Immersive content, covering such areas as virtual reality, augmented reality and mixed reality, is viewed as one of the key services for the 5G network system.

On April 3, Asia’s fourth-largest economy became the first country in the world to launch full-fledged 5G services, which are designed to offer unparalleled wireless connection speeds, low latency and the ability to connect many more devices without a drop in performance.

“Immersive content is one sector that is expected to log solid growth as more 5G services go online around the world,” the ministry said.

These five fields are being targeted because they have the potential to become the country’s next innovative growth engines.