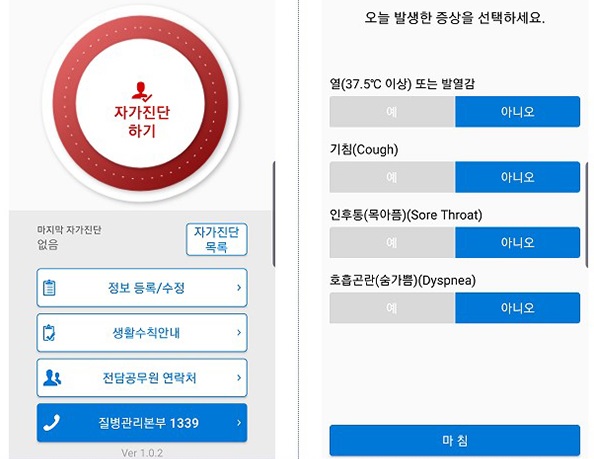 A safety app for people under self-quarantine. (image: Ministry of Interior and Safety)

The Ministry of Interior and Safety announced Thursday that it decided to export a safety app for people under self-quarantine to Central and South America as part of its international co-op project with the Inter-American Development Bank (IDB).

The app will first be introduced in Peru, made possible through a US$140,000 investment from the IDB.

It is the first time for a self-quarantine app made in one country to be introduced to another state.

Other similar exports include safety bands, used to monitor those who have violated self-quarantine, which were recently sent to Saudi Arabia.

The app comes with a reporting function that the self-quarantined individual can use to check/report symptoms regularly, and makes use of global positioning system (GPS) to track and verify whether the individual has left the quarantine area.

Following a request from the IDB, the ministry held a demonstration of the app in March in front of the heads of digital affairs from Central and South American governments.

The language, map, and other interface inside the self-quarantine app will be localized, with the addition of new functions requested by the IDB and the Peruvian government including information on medical institutions, before it is released to the public as early as this month.

A South Korean company will be responsible for offering technological support and user instructions after the app is launched in Peru.

The South Korea government is expecting other Central and South American countries to also adopt the use of the app once it becomes established in Peru.