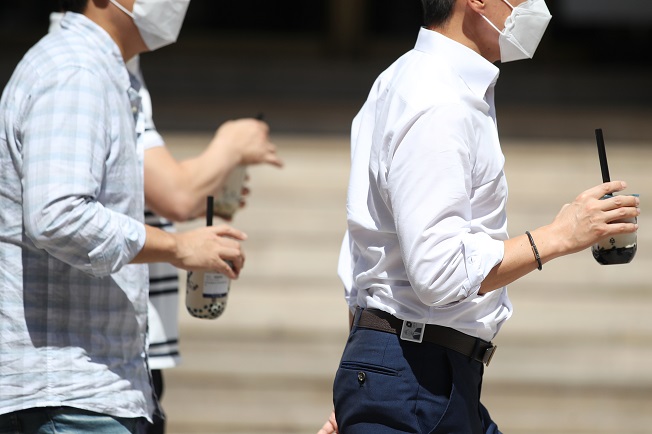 People walk while holding takeout coffee on a street in Seoul on Sept. 4, 2020, as the government decided to extend the toughened social distancing guidelines for the greater Seoul area until Sept. 13. (Yonhap)

SEOUL, Sept. 4 (Korea Bizwire) – South Korea on Friday decided to extend tougher anti-virus curbs on restaurants, bakeries and coffee shops in the greater Seoul area for another week, as sporadic cluster infections and untraceable cases are still popping up in the densely populated area.

Since Sunday, the country began limiting operations of restaurants, bakeries and franchise coffee chains in the Seoul metropolitan area under the so-called Level 2.5 social distancing guidelines, while implementing the Level 2 measures across the country since mid-August.

The toughened distancing in daily lives for the capital area, originally set to end Sunday, will be maintained until Sept. 13. The Level 2 measures in place across the country will also be extended by two weeks until Sept. 20, according to health authorities.

“In order to regain our control over the spread of the virus and to secure a stable medical system, we need to extend the social distancing measures until the number of new patients clearly drops,” Health Minister Park Neung-hoo said during a briefing.

Officials said a daily increase of around 100 COVID-19 patients is considered a manageable figure under the local medical system.

“As we began social distancing bearing inconveniences in our daily lives and economic losses, we need to achieve tangible anti-virus outcomes using this opportunity,” he said.

The tightened anti-virus measures for the greater Seoul area came just days after the country’s daily new infections soared to a near six-month high of 441 on Aug. 27. 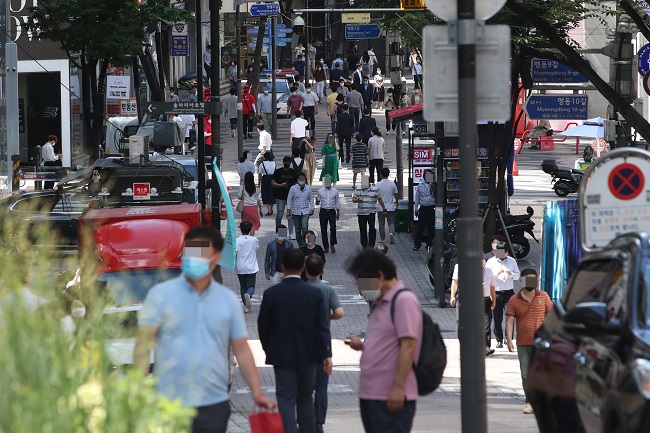 This photo, taken on Sept. 4, 2020, shows the shopping district of Myeongdong in downtown Seoul. (Yonhap)

Since Aug. 14, the number of new daily cases has been in triple digits, mostly traced to a conservative church in northern Seoul and an anti-government rally in the capital on Aug. 15 Liberation Day, though new infections have been under 300 for a week.

Friday marked the second straight day the daily figure stayed below 200 amid signs of a slowdown in new infections, but authorities said the declining trend was not clear enough to let their guard down.

“Given the current scale of infections, the risk is still too high to return to our normal lives,” Jeong Eun-kyeong, chief of the Korea Centers for Disease Control and Prevention, said in a daily briefing, referring to virus outbreaks reported at offices, restaurants and medical facilities.

Under the Level 2.5 rules, restaurants and bakeries can operate until 9 p.m., and only takeaway and delivery are permitted from 9 p.m. to 5 a.m.

For franchise coffee chains, only takeout or delivery is permitted regardless of operating hours, as cluster infections traced to coffee shops have been reported. Starting next week, the same rule will be applied to franchise bakeries and ice cream shops.

Indoor sports facilities, such as fitness centers and billiard halls, as well as cram schools are also shut.

In other parts of the country under the Level 2 scheme, South Koreans are allowed to maintain most of their daily routines, but outdoor gatherings of more than 100 people are banned.

Sports events are allowed without spectators, and indoor meetings of 50 or more people are prohibited.